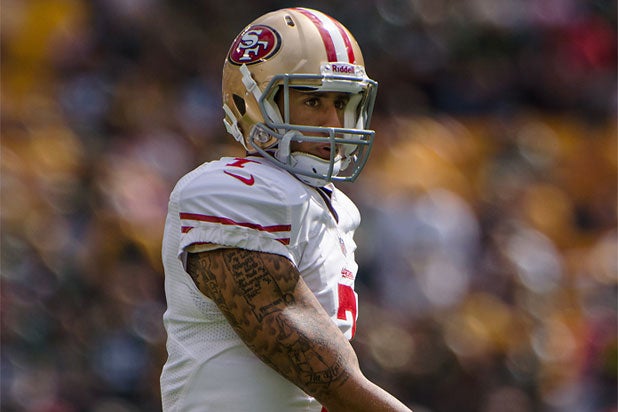 The former San Francisco 49ers quarterback who started the national anthem kneel-down protest last year finds himself a few days out from Week 1 of the 2017 season — and still out of a job. Many people think that’s solely due to the now-infamous protest, while others simply see Kaepernick as a declining commodity between the sidelines.

“Does he have more talent than quarterbacks that are on rosters right now? Yes he does,” Tirico said during a recent interview with TheWrap. “So from that perspective, he should be on a roster.”

Except Kaepernick is no on a roster, and hasn’t been since he opted out of his 49ers contract on March 1. He was going to get cut anyway, but no one thought it would take this long for his strong arm and active legs to land with a new employer.

“His political protest is the main reason he is not on a team right now,” Tirico said, although the former ESPN “Monday Night Football” play-by-play man knows there is probably more to Kaepernick not playing than just politics.

Also Read: We Found the One NFL Team That Would Sign Colin Kaepernick

There are still some unknowns with No. 7 — and not all are to do with the 29-year-old’s stance, or even skills.

“Where is his commitment to football?” Tirico asked, role-playing as a team owner for the consideration. “Is he truly committed to being a quarterback who will improve?”

“You certainly don’t want to run a drop-back passing system with him. That’s not his strength. You have to have a system that fits,” he continued. “And if he’s not gonna be the guy, your franchise quarterback, are you then going to take everything that comes with it — which is significant attention — for … your backup quarterback.”

Of course, our interview wasn’t all asking for a fresh take on admittedly old news — we also tapped Tirico for his Super Bowl pick. His chalk answer might be a bit of a letdown for readers hoping for a long shot: Mike’s got the New England Patriots versus the Green Bay Packers. No surprises there, but still a cool matchup.

And he’s got good news for fans of teams in the biggest media markets. Tirico told us he’s hotter than most on both Los Angeles-based teams, citing Philip Rivers’ veteran leadership for the Chargers, and heaping praise on new Rams coach Sean McVay. Over on the east coast, Tirico said he “would not be shocked if the Giants won that division this year.” Sorry, New York Jets fans, we’ve got nothing for you to hang your soon-to-be-battered helmets on.

The 2017 NFL season officially kicks off Thursday on NBC, when the Kansas City Chiefs challenge the defending champion Patriots in primetime. Tirico won’t be working that one from the booth, as it is technically a “Sunday Night Football” production (weird, we know), though he’ll be hosting “Football Night in America” from the comfort of the studio.