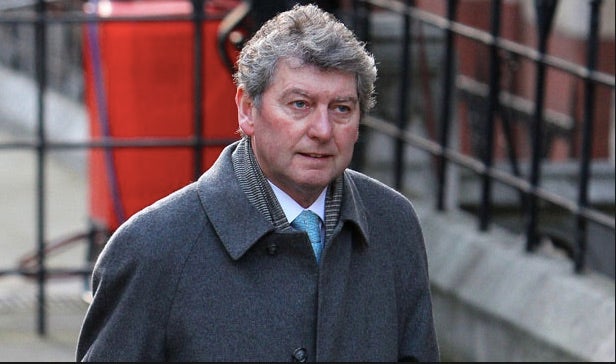 Myler’s departure was expected for weeks in the wake of owner Mort Zuckerman’s failed bid to sell the newspaper.

The British journalist implemented a more buzzworthy coverage trend at the paper, opting for a surge of celebrity angles, like aerial shots of Caitlyn Jenner in a dress. He’ll be returning to his family in London.

“The sole reason [for his departure] is one that you might be well aware, Colin and his wife Carol are yearning to be reunited with their family and four grandchildren,” Daily News CEO Bill Holiber and owner Mort Zuckerman wrote in a memo to staff.

One of Myler’s biggest crusades as editor was gun control, which the Daily News covered at length.

“After the Sandy Hook school shootings, Colin originated the Daily News campaign to strengthen America’s gun controls — a campaign that led the News’ famous front page of “Shame on U.S.” being presented on the floor of the Senate by Diane Feinstein.”

Read Holiber and Zuckerman’s memo below.

It is with sincere sadness that we inform you that Colin Myler will be leaving the News to return to London. The sole reason is one that you might be well aware, Colin and his wife Carol are yearning to be reunited with their family and four grandchildren.

When we met Colin for the first time four years ago, we had an immediate sense that we had found the Editor most perfectly suited for the Daily News. Beyond Colin’s extensive executive experience, keen editorial and strategic judgement, which we will reflect on shortly, we identified an ethically and morally decent guy. His contribution and leadership over the past four years is something that most of us would hope to achieve in a lifetime. He has changed the culture of our newsroom, expanded the Daily News brand to a national level – in print and digitally — and overseen the doubling of our website audience.

After the Sandy Hook school shootings, Colin originated the Daily News campaign to strengthen America’s gun controls — a campaign that led the News’ famous front page of “Shame on U.S.” being presented on the floor of the Senate by Diane Feinstein; Greg Smith’s brilliant expose of NYCHA led to the disbandment of the NYCHA board and a complete overhaul of the authority. Our winning campaign to get 12,000 airport baggage handlers a raise on their minimum wage; And two enormous examples of the Daily News at its best in the community — two incredible fund raising initiatives that raised $600,000 for victims of Hurricane Sandy and nearly $800,000 for the families of the two slain NYPD officers earlier this year. And of course, Colin initiated the launch of our Hometown Heroes Awards for transit workers and educators. We mentioned Hurricane Sandy earlier, and recalled what a senior executive told us after we lost our office due to the storm, “If it hadn’t been for Colin’s drive and leadership, we probably wouldn’t have gotten the paper out.” We did — and never missed an edition.

On a personal level, Colin has been a wonderful partner of ours as we have navigated the transition of the News through an ever-challenging and changing media landscape. We are now in a better position than ever to advance our business and Colin’s role in that cannot be understated. Mort says of Colin: “He is one of the finest editors I was lucky enough to hire. I will miss his leadership — but always value his friendship.”

Colin as we all know is also a master at developing editorial leadership and talent. With that said, we are delighted to announce that one of our own, Jim Rich, Colin’s deputy, will become our new Editor in Chief, later in the year, after Colin’s departure. Jim has a instinctive and passionate understanding of the Daily News brand, knows what it’s like to work in the trenches and has played a major role in leading the digital transformation of our organization. He is committed to continuing our enterprise journalism and the great hometown tradition championed by the News. Jim knows the impact of our popular journalism and how it can entertain and influence change for people that need a voice. He also understands the changing landscape of legacy media and has a clear strategic vision to help us evolve and prosper.

While this is a bittersweet moment, let us all thank Colin and congratulate Jim!