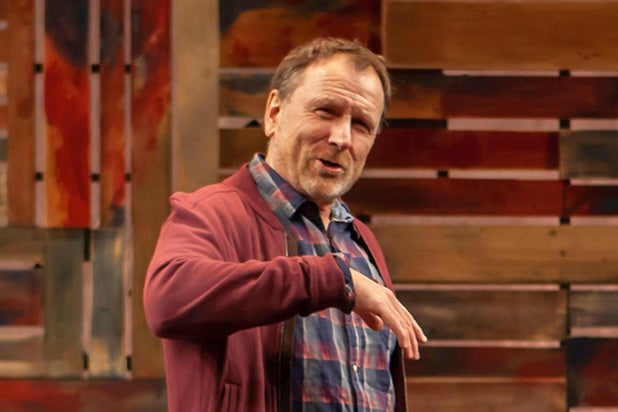 Colin Quinn returns to the New York stage with his sixth one-man show, “Colin Quinn: Red State Blue State,” which opened Tuesday at Off Broadway’s Minetta Lane Theatre. Despite that title, the former Comedy Central, MTV and “SNL” star doesn’t take political sides in his gentle diatribe on what’s wrong with America. Previously, Quinn’s shows have been recorded by Netflix or HBO. Audible is on board this time with “Red State Blue State,” and the show seems designed for an audience far beyond the West Village theatergoer who usually buys a ticket to the Minetta Lane. In other words, no one could possibly be offended, upset or even mildly irritated by anything Quinn has to say in “RSBS.” And that’s a real problem.

Which is not to say that this stand-up comic is anything but consistently clever. The audience awards him with nonstop guffaws. According to Quinn, the United States of America is a concept that has “run its course…isn’t working out…didn’t really pan out…we’re running on fumes… we got greedy.”

He predicts a revolution, but what would the “Battle of Six Flags” look like, he wonders, and how about all those “fat refugees” fleeing the country to, where, Mexico?

Often, Quinn makes perfect sense. “Every 700 miles people have different personalities,” he says. After all, shouldn’t people from New Jersey and Utah be as different as people from Scotland and Yugoslavia?

Other stuff is scatterbrained but fun. He puts the “end of humanity” at the time when “robots,” i.e., cars, replaced “horses,” and no one cared. So why shouldn’t robots replace humans?

Quinn puts most of the blame on social media, a favorite punching bag that no one could argue with in 2019. People don’t meet or talk to each other anymore, meaning that the future will be nothing but “roaches, rats and Amazon delivery trucks.” More novel is his take on Tindr, and how even Caligula would be aghast enough to opine, “This is s—!”

Quinn is at his funniest when he takes on — no surprise — Donald Trump. He doesn’t resort to the beach-blond wig, the obscenely long red tie or turning his mouth into a cat’s anus. Quinn doesn’t even sound that much like the president, but he replicates his one-syllable bombast (“great”) to perfection. So how come every state in the union, even those that didn’t vote for Trump, get the same one or two-sentence take-down? (Michigan: “No one’s going back to Detroit. Drop it.”)