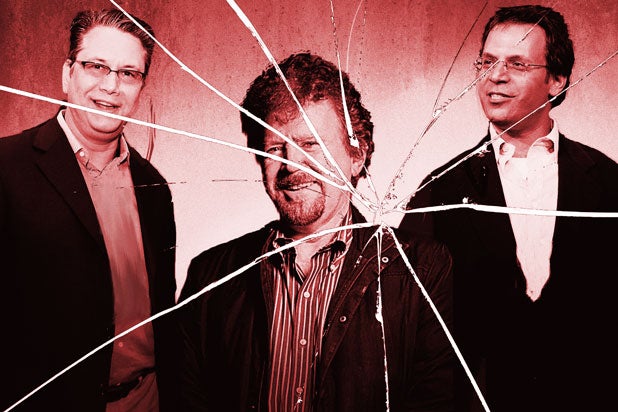 The abrupt collapse of sex abuse cases against three Hollywood executives is raising questions about ethics and law by seasoned media observers and representatives for the defendants, who are crying foul.

“It’s a disgusting abuse of my client,” said Patty Glaser, lawyer for former Disney executive David Neuman, in an interview with TheWrap. “I can’t speak for anybody else. I know our facts, I don’t know the other facts. And this is a disgusting violation of my client’s rights. “

Lawsuits against former NBC executive Garth Ancier, former Disney executive David Neuman and Broadway producer Gary Goddard were dismissed in the past few weeks, but only after a nationwide discussion about their participating in alleged serial rape at wild Hollywood parties in the gay community that made them headline news all over the country.

Attorney Jeff Herman, who filed the suits on behalf of Michael Egan in Hawaii,  raised eyebrows from the start by calling a news conference at the Four Seasons Los Angeles hotel to announce the initial lawsuit filed against director Bryan Singer. The lawsuit seemed timed for maximum media impact, just ahead of the opening of the Singer’s new “X-Men” movie in April.

The allegations were horrific: that Singer had serially raped a teenaged Egan while the young man was still a minor, promising him roles in his movies. And it was followed by lawsuits against the former Hollywood and Broadway executives.

From the start the flimsiness of the evidence in the Hawaii cases was disturbing to many, but so were the accusations which, if true, suggested a cabal of gay producers and movie executives preying on innocent teen boys.

Now some are accusing Herman of feeding homophobic stereotypes.

“The notion of what he’s proposing — a gay Hollywood sex ring that trafficked in rape of minors, is a homophobic fantasy,” said Herndon Graddick, the former president of GLAAD and a longtime friend of Neuman, in an interview with TheWrap.

“This is the oldest homophobic trope in the book, that gay people tolerate abuse of minors,” he said. “I can’t believe there has ever been a group of gay men in Hollywood standing around watching children be raped. I find that absolutely ludicrous.”

Egan accused Singer and others of sexual abuse in Hawaii in August and October of 1999.

But in a sworn deposition dated 2003 related to a similar earlier case, Egan said that he’d never been to Hawaii, or even outside of the continental United States. Singer’s representation provided evidence that Singer had not been to Hawaii in 1999, either. Because of that, they now allege that Egan no longer has a case with merit.

The other defendants provided similar evidence proving they were not in Hawaii at the time of the alleged crimes. In addition, Glaser produced a declaration from 2003 signed by Egan on behalf of her client David Neuman, saying that he’d had nothing to do with allegations of sexual abuse by Neuman’s boss, Marc Collins-Rector, at a video production company named DEN.

And Glaser said that she contacted a corroborating witness of the sexual abuse provided by Herman.

“When we called the witness he gave us a declaration to the contrary,” she said. “He said Herman called him for cooperation and he said that he could not provide that because it’s not true.”

Said Glaser: “After he (Herman) made these outrageous declarations, it was ‘Gee I hadn’t read this. I’ll take this under advisement.'”

Herman could not be reached by phone for comment and did not respond to an email seeking a response.

Gary Frischer, a class action lawsuit consultant who has worked with Herman in the past, said the swift accusation followed by the dismissal of the cases disturbed him.

“When someone comes into the press and files cases and then does a lot of media, press conferences, unless he has something he’s coming back with, he’s fishing for more cases. He’s looking for more people to come out of the woodwork,” said Frischer.

“As a media expert in this field, it looks like something went astray. And he’s hanging people’s reputations out to dry.”

The case is not over. Herman has filed new sex abuse cases in federal court in Los Angeles on behalf of an anonymous plaintiff.

Glaser said that she hoped to have the L.A. lawsuit against Neuman dismissed, and then intended to sue Herman for malicious prosecution.

Graddick said that the rapid filing and dismissal of the cases will make sexual abuse cases more difficult to stick.

“I am a survivor of child abuse,” he said. “I will say that for Michael Egan to level these false charges suggesting he was a victim of abuse that didn’t occur is an affront to every abuse victim seeking justice. It makes it harder for real abuse victims to seek justice.”

Meanwhile the damage to the reputations of Neuman and others is an open wound. Said Frischer: “There’s a rule: it’s first to the media. There will always be a question in people’s minds — did he or didn’t he do it — even if an individual clears his name.  There’s always a question.”