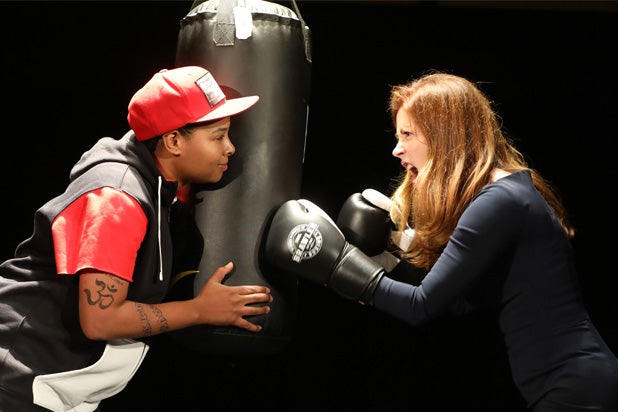 The least wonderful thing about Jen Silverman’s comedy “Collective Rage: A Play in 5 Betties” is its subhead, which reads “In Essence, a Queer and Occasionally Hazardous Exploration; Do You Remember When You Were in Middle School and You Read about Shackleton and How He Explored the Antarctic?; Imagine the Antarctic as a Pussy and It’s Sort of Like That.”

Maybe it’s not fair to put that mess of words at the top of a review, but they are Silverman’s words, used to describe her exhilaratingly absurdist new play, which opened Wednesday at Off Broadway’s Lucille Lortel Theatre after its 2016 world premiere at Woolly Mammoth in Washington, D.C.

The subhead sort of sums up what the play it about, but only makes sense (sort of) after you’ve sat through it. Missing in Silverman’s long description is the fun of watching her play, which is unlike anything else on the New York stage now or last season or any season before that.

Also Read: 'Be More Chill' Theater Review: This Coming-of-Age Musical Is a Real Pill to Swallow

In “Collective Rage,” presented by MCC Theater, five women meet and aren’t in any way surprised that they all share the name Betty, which is the least of ways in which they are boxed in by expectations, theirs and others, of how women should behave.

Betty 1 (Dana Delany) and Betty 2 (Adina Verson) are both married to men and neither of them has had sex in years. Betty 3 (Ana Villafane) claims to be bisexual and never talks about having sex with men but does talk a lot about “pussy,” which really shocks Betty 1 but intrigues Betty 2 enough to start looking at her own vagina in a handheld mirror; it’s an activity that turns into such an avocation that Betty 2 literally turns into a vagina that sings.

Then there are the butch lesbians Betty 4 (Lea DeLaria) and Betty 5 (Chaunte Wayans); they work on repairing truck motors while discussing their gender identity, or lack thereof. Amid much tool tinkering, these two Betties talk about women the way men talk about women, that is, as objects to screw.

One of the remarkable things about “Collective Rage” is how the male species is never turned into the villain. Men, actually, aren’t much mentioned, except when the first two Betties talk about not having sex with their respective husbands.

And an even more remarkable thing about “Collective Rage” is how none of the Betties is turned into a victim despite the enormous and disparate metamorphoses that four out of the five characters undergo. Only DeLaria’s Betty doesn’t appear to budge much as she occasionally barks out a response that often sums up the audience’s rapt confusion of what’s transpiring on stage. In this regard, “Collective Rage” astonishes more in what it does and achieves on stage in an action-packed 90 minutes than what it says or means.

The sexual fluidity of women, as opposed to men’s more hard-wired psyches, is the Antarctica of Silverman’s subhead. Verson’s timid Betty turns into a lion before she turns into a vagina, and the catalyst for these monumental changes, among others, is the play within the play that Villafane’s Betty decides to stage for us.

“Collective Rage” is as much about the theater as it is feminism, and it’s here that Silverman is at her most absurdist. Villafane’s Betty believes that the theater will make her a superstar, the ridiculousness of which Silverman and Villafane mine for considerable comic effect. But when those laughs have died down, “Collective Rage” is clearly a testament to the power of the theater to transform, even if it does the job one person at a time. Indeed, watching Villafane’s gradual transformation into a superstar (the actress earned a Tony nomination playing Gloria Estefan in “On Your Feet!”) is nearly as breathtaking as Verson’s morphing into a lion and then a vagina.

Also Read: 'Pretty Woman' Broadway Review: The Hooker Julia Roberts Made Famous Is Back, and She Can Belt

Equally arresting is the mating game between Wayans’ tough girl and Delany’s Upper East Side matron. Together, these two actors generate twice the heat of that couple in “Pretty Woman.” Not that “Collective Rage” is any paean to female queers gone wild. There is something “hazardous” about the lustful affair (“love” isn’t quite the right word) depicted by Wayans and Delany. The two women end up giving themselves the name of Betty 1’s husband, Richard, and wearing his business suits. Who would call that progress?

Silverman builds “Collective Rage” through a series of short rapid-fire scenes. In the beginning, its charms appear to depend on the excellence of the cast and the dazzling direction of Mike Donahue, who loads the stage with flashing title cards and any number of objects that appear and disappear in the most startling of ways. The terrific set and lighting is by Dane Laffrey and Jen Schriever, respectively.

In the end, however, Silverman’s play emerges as neither slight nor dependent on clever staging. “Collective Rage: A Play in 5 Betties” takes us on not one but several extraordinary journeys with breathtaking speed and insight. The play’s logic is delightfully skewed every which way, but in the process of being nonsensical, it manages to expose five fiercely beating human hearts.