Georgia finally conquered Alabama to win its first National Championship since 1980 on Monday. The Bulldogs’ 33-18 victory over the Crimson Tide drew more than 22 million viewers for ESPN’s family of networks.

While that was a significant turnaround (up 19%) from last year’s pandemic-fueled record-low audience of 18.7 million, it was down around 15% from the last pre-pandemic game in January 2020. It still ranks among the least-viewed National Championship games in college football’s era of staging an end-of-season matchup to determine the national champion.

At its peak, the game was viewed by 25.4 million viewers.

ESPN simulcast the game on its family of networks including SEC Network, ESPN2, ESPNews and others that each featured their own specially tailored broadcasts. 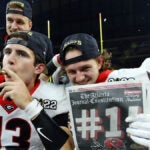 Monday’s game marked the sixth time in the last seven years that Alabama has reached the title game (Georgia itself has reached the big game multiple times during the CFP era, though this was its first win). It was a close score at halftime, with Alabama leading 9-6 as the teams traded field goals. Georgia outscored Alabama 27-9 in the second half.

The College Football Playoff has been in existence since 2014, with its predecessor, the Bowl Championship Series (BCS) responsible for determining the national champion for the prior 16 years. The game was played at Lucas Oil Stadium in Indianapolis.

The share of TV viewers tuned in to this year’s CFP National Championship was the best on record in the CFP era, with 29% of people overall and 38% of adults 18-49 that were watching television Monday night.

The New Year’s Six and National Championship were up 16% over last year, with an average of 14.2 million viewers across the seven games. The CFP semifinals and national championship game registered 18.9 million average viewers, on par with last year’s CFP when the semifinals were on New Year’s Day.