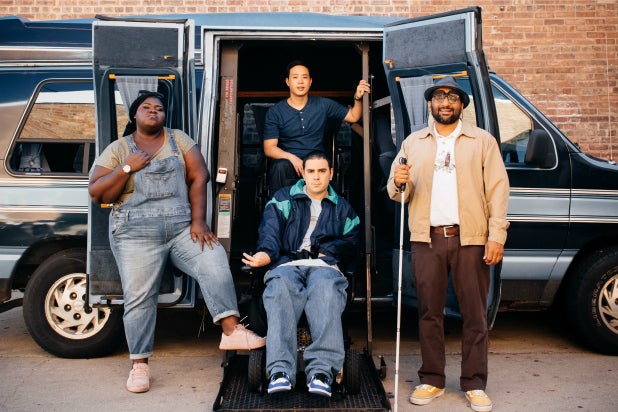 Too often, we define marginalized groups as targets of oppression or as social justice fighters, but rarely as just regular people who wake up every day, pee, go to work and have sex like the rest of the world. Director Richard Wong attempts to offer this more humanized narrative that centers on disabled characters in his surprisingly tender new comedy, “Come As You Are.”

But in doing so, he provokes a similarly important thought: Why are all the leads played by able-bodied actors?

Inspired by Asta Philpot’s real-life journey, “Come As You Are” is an intriguing rom-com slash coming-of-age tale along the lines of “American Pie,” except told through the perspective of three disabled young men with dreams of escaping their fiercely guarded lives and getting laid. The abrasive Scotty (Grant Rosenmeyer, “Crazy Ex-Girlfriend”), who uses a wheelchair, lives with his mother and caregiver, Liz (Janeane Garofalo), who is tethered to him so tightly that he can barely use the bathroom in peace.

Also Read: Former 'Simpsons' Composer Alf Clausen Says He Was Fired Because of His Age and Disability in New Lawsuit

When Scotty meets Matt (Hayden Szeto, “The Edge of Seventeen”), a former football star who also uses a wheelchair, he’s drawn in by his good looks and the fact that he has a girlfriend. But like Scotty, Matt’s parents smother him, and he’s beginning to lose hope in his relationship now that his sports aspirations have been dashed.

Then there’s Mo (Ravi Patel, “Meet the Patels”), who is visually-impaired and perfectly content experiencing life safely within the borders of their small town and at his desk job. When Scotty proposes the three of them drive to a brothel in Montreal that “caters” to men with disabilities to lose their virginity, Mo initially refuses the idea. He grows even more concerned when they hire a stranger named Sam (Gabourey Sidibe) to drive them across the border in a random van.

But “Come As You Are,” elevated by the ardor and shamelessness of Erik Linthorst’s script, is as much about these men facing their fears as it is about fornication. They decide to release themselves from societal and familial confines that dictate they are unable to have complete, fulfilling lives with their disabilities so they can go to a place that will treat them as the capable adults with sexual desires that they are.

It’s certainly a powerful statement to make, especially for an audience that has been terribly underserved on screen, although it also encourages able-bodied viewers to see past their own perceptions of the disabled community. It’s clearly something that both Wong and Linthorst were cognizant of as they focused on the humanity of these unlikely friends, even as they’re talking about jerking off as they head down the interstate.

But if they were really interested in humanizing people with disabilities and offering them a story in which they are authentically reflected, why did casting directors Jennifer Rudnicke and Mickie Paskal hire able-bodied actors to portray them? It sends the message that the film is progressive, but only up to a certain point. That’s not enough.

It’s a flaw that threatens to take you out of the film entirely. But the wildly disparate cast of characters makes for at least a fun road-trip comedy that has moments of sincerity amid Scotty mouthing off about one thing or another while Mo and Matt deliberate on what this excursion means for them. The central male cast is equally sensitive to each of the character’s journeys, which makes it even easier for the audience to engage with their stories.

And just as easy as it is for audiences to grow attached to the core male characters, the kind whose lives are often sidelined on film, it’s worth noting that Sidibe’s character allows her to be a romantic interest, a rare feat for the actress who catapulted to fame as the relentlessly tragic protagonist in “Precious.” With body positivity still an uphill battle in Hollywood, Sam’s story is refreshing despite also being paper-thin. We still see Sam mostly through the eyes of her male scene partners, as a sassy, mysterious, though ultimately compassionate young woman.

(Even the concept of female sex workers, which could have easily been treated as comic relief in this type of film, is portrayed with a surprising level of respect and tenderness.)

Does all of this make “Come As You Are” a good movie? Shortsighted casting aside, it’s an enjoyable and heartfelt viewing experience, though its uninspired cinematography, unlike the fabulous poster, doesn’t do the film any favors. But it’s one of those awkward films that seems almost too concerned about its potential impact to really soar. From its safe casting to the optics of Scotty’s apparent white-male aggression among characters of color, Wong and Linthorst seem to be urging the audience to overlook its more tone-deaf messages for the sake of disability visibility — which it only halfway celebrates.

“Come As You Are” is best when it’s not trying so hard to be the next great sex comedy and actually focuses on building the relationships among the male friends and their own existential crises, which gives the film so much pathos as it explores their vulnerabilities and frustrations. Those moments make every sidesplitting scene so rich with layers. Too bad the film’s unevenness gets in its own way.