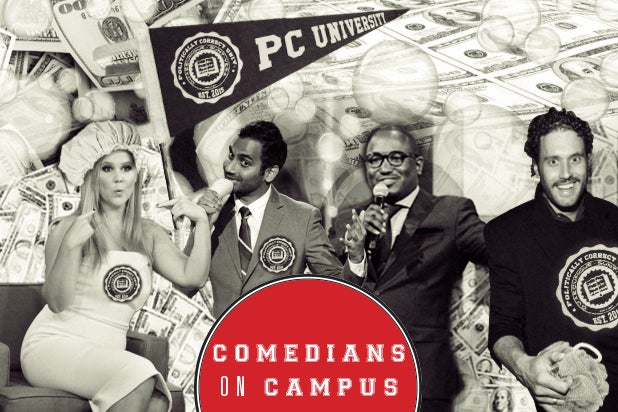 Comedy giants like Jerry Seinfeld and Chris Rock may shun gigs on college campuses because “they’re so P.C.,” in Seinfeld’s words. But there are still plenty of comedians who are profiting big from appearances at American institutions of higher education — particularly if they’re willing to tweak their acts.

The only exchange, often, is a clean show that doesn’t ruffle feathers.

“These events are financed through student activities fees, these are million-dollar-plus funds and it’s a huge financial boon for comedians,” said one top booking agent speaking on the condition of anonymity. “It’s the best gig out there because there’s no pressure to sell tickets like they would have to at clubs or casinos. Everybody wants to get a piece of it.”

Colleges will cough up as much as $30,000 for a show, the individual said, and comics often see a spike in their social-media numbers by winning over a younger audience. “College kids have a lot of influence over who the next cool person is,” the insider added. Indeed, Daniel Tosh was a consistent earner on the college circuit before catapulting to his own digital clip show on Comedy Central.

Considering that standups playing nightclubs typically make considerably less — anywhere from $25 up to $2,000 for big names, according to the insider —  the college gigs offer a financial opportunity that’s too good to pass up. Even if it means compromising how outrageous or foul-mouthed they can be on stage in the context of command performances, which also includes gigs at corporate retreats and conventions.

The content agreement isn’t just a handshake deal. Some appearances come with contractual provisions that discourage or explicitly ban jokes about sensitive material.

Also Read: 15 Comedians Who Were Under Fire Over Jokes: Stephen Colbert, Amy Schumer and Trevor Noah

“Top sheets of offers have points on what you can’t talk about. It’s not just, ‘Hey, we need a clean show because it’s Parents Weekend,’ there’s a palpable fear of backlash,” said the insider. “Everybody is afraid of being sued. If a student gets defensive over something they heard that’s provided by the university, the schools feel they’ll be liable.”

Michael Yoder, a college-entertainment consultant who helps to book acts like Ansari and Schumer across the Midwest for the agency Funny Business, said schools know immediately what they’re looking to avoid in performances.

“Usually, clients don’t want anything too sexual or racy,” said Yoder, who has worked with both religiously affiliated colleges as well as secular ones. “Not to mention every college wants to promote cultural diversity, so they never want anything that would offend or ostracize specific groups. They don’t want to be liable for anything like this.”

He said most experienced comics are able to accommodate the requests. “Acts will usually have enough material to avoid certain topics entirely,” he said, “or slightly alter them to not go as far as they would in a nightclub.”

Yoder said brand identity can help cushion a potentially offensive act, that if a comedian is known for a specific kind of humor this serves as a kind of disclosure.

“With someone like T.J. Miller, they know what they’re getting and willing to take the risk,” he said of the foul-mouthed millennial favorite who slings penis jokes and objectifies women on HBO’s “Silicon Valley” and other TV appearances. “But if someone is so over-the-top offensive, a client would never inquire to book.”

Both the institution’s fear of liability and the sensitivity of student bodies contribute to this kind of content vetting, Yoder said. He doesn’t see the harm. “Is it that bad?” he asked.  “At the end of the day, this is about making people laugh.”

Comedians Dump Campus Gigs: When Did Colleges Lose Their Sense of Humor?

15 Comedians Who Were Under Fire Over Jokes: Trevor Noah, Stephen Colbert and Amy Schumer