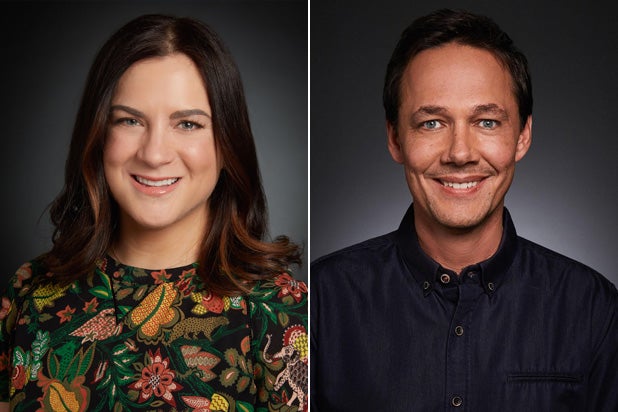 Comedy Central has promoted Sarah Babineau and Jonas Larsen to co-heads of original content, the Viacom-owned network announced on Thursday.

The duo, who previously managed the talent and development teams at Comedy Central, will now oversee all content developed across the network’s platforms, as well as the launch of Comedy Central Productions. They will report to Kent Alterman, president of  Comedy Central, Paramount Network and TV Land.

Babineau will lead the development of all scripted content developed by Comedy Central, including projects produced CCP for other outlets, and will liaise with Paramount Players on Comedy Central-branded feature films. She will continue on as executive in charge of production for “The Daily Show with Trevor Noah.”

Larsen will oversee the development of unscripted content developed by the brand, including talk shows, documentaries, specials, as well as all stand-up, live events and audio offerings.

“Through their incredible eye for talent and innate ability to develop the right project for the right platform, Sarah and Jonas have helped build the Comedy Central brand into the strongest position it has ever been,” Alterman said in a statement. “Working closely with them often makes me feel a little less sharp, but in a good way. We are so lucky to have them.”

“We could not be more excited and honored to continue building the Comedy Central brand and expanding its amazing legacy,” Babineau and Larsen said. “To come to work every day with the goal of making the world laugh is a dream come true.”

Larsen first joined the network in 2010 and has been responsible for Comedy Central’s ongoing talent development and relations, stand-up acquisitions, live touring and festivals, as well as overseeing the production and development of original specials and tentpole events including the “Comedy Central Roast” franchise.

Babineau joined Comedy Central in 2014, helping to launch “The Daily Show with Trevor Noah” and going on to oversee all East Coast-based scripted franchises. She and Larsen were named co-head of talent & development in 2017.