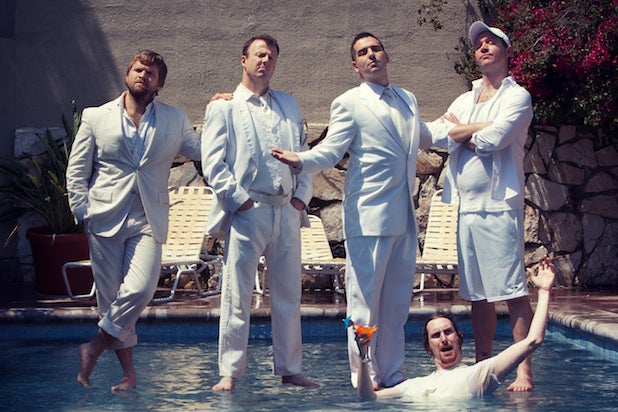 Los Angeles-based comedy group Dr. God is taking its collective talents to both the big and small screens with its upcoming film “Bloodsucking Bastards” and the soon-to-air TV series “MOCKpocalypse,” TheWrap has learned.

Dr. God (pictured above) has partnered with Fortress Features and MTY Productions to produce the horror comedy “Bloodsucking Bastards,” which O’Connell recently directed from a script that Dr. God co-wrote with Ryan Mitts.

Kranz stars as Evan Sanders, an overworked employee stuck at a soul-killing corporation with his beautiful girlfriend Amanda (Fitzpatrick) and his slacker best friend Tim (Kern). Evan’s world begins to crumble when Amanda dumps him and his boss Ted (Murray) hands his coveted promotion to his nemesis Max (Pascal).

The members of Dr. God round out the cast of office employees in the film, which is described as a cross between “Office Space” and “Shaun of the Dead.”

On the TV side, Dr. God has teamed with AXS TV on the comedy series “MOCKpocalypse,” which is currently in production. Dr. God’s Garguilo and Park developed the show and serve as executive producers.

“MOCKpocalypse” is a talking-head style series that takes a comedic look at topics in the world of music.

The series is slated to debut on AXS TV this June as part of the network’s Thursday night comedy lineup.

Outside of Dr. God, Park’s animated/live-action comedy “Fist Man” will appear on Adult Swim this summer, while Garguilo will be returning to the cast of MTV’s “Awkward” for his fourth season. Additionally, O’Connell’s feature, “Angry White Man,” will be released in June.

Ware is currently writing his second feature for the Disney Channel and Cowhig will be performing at the Hollywood Fringe Festival this summer.

Dr. God performs regularly at iO West in Hollywood and can be seen at the Los Angeles Improv Comedy Festival with guest Matthew Lillard on Friday, June 6 at 8 p.m.