We’re two weeks out from San Diego Comic-Con 2022, which happens to be the first real SDCC since COVID-19 shut everything down in 2020. Yes, Comic-Con international did hold a very small, stripped down version of the event last thanksgiving but this year marks the convention’s return — hopefully — to pre-COVID glory.

Naturally, you can expect a lot of great panels and events to plan for, and lucky for you, per tradition, today marks the start of daily news drops for the SDCC 2022 schedule. So grab your calendar and let’s get started. (And also, wear a mask, folks, seriously. The latest COVID surge will be peaking around the time this happens.)

Paramount claimed the first Hall H panel of SDCC 2022 with a look at “Dungeons & Dragons: Honor Among Thieves,” which starts at noon on July 21 in Hall H. 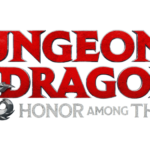 Among the highlights are panels for FX’s “What We Do in the Shadows” and “Mayans MC,” ABC’s “Abbott Elementary” and “the Rookie” and “The Rookie: Feds,” and Disney+’s upcoming “National Treasure: Edge of History.” There’ll also be big panels for animated hits like FX’s “Archer” and Fox’s “Bob’s Burgers,” “The Simpsons” and “Family Guy,” TBS’ “American Dad!” plus a panel for Hulu’s “The Orville: New Horizons.” And a lot more.

And yes, missing from Disney’s announced panels are appearances by its big blockbuster babies, Marvel Studios and “Star Wars,” but don’t worry, presumably they’ll be getting their own announcements — though bear in mind, with D23 coming later this summer, it’s strongly there’ll be a lot held back from SDCC.

Meanwhile, Dwayne “The Rock” Johnson has confirmed his upcoming DC Comics movie “Black Adam” is getting a big panel in Hall H on Saturday, July 23.

Like always, there’s going to be a lot to digest, so if you’re looking for an easy run down of what to see, we have you covered. Read on for the current announced panels, activations and events, and be sure and check back regularly, as we’ll be updating this post as more panels are announced.

In addition to panels and events, participating studios and companies will also be hosting off-site activations — that’s a silly marketing term for a brand-building event or activity — open to the general public and not just SDCC badge holders. So if you’re gonna be in San Diego but couldn’t score Comic-Con passes, here’s your chance to see at least some of the fun.

When: Thursday, July 21 starting at 6:00 a.m. Pacific and continuing through Sunday, July 24
Where: The Hard Rock Hotel.

Coming right after “Severance” received 14 Emmy nominations, Apple TV+ is bringing a slice of the show’s universe to Comic-Con.

Starting Thursday, July 21 at 6:00 a.m. Pacific, and continuing through Sunday, fans will be able secure a reserved time to experience Lumon’s employee orientation — Sign up at welcometolumon.com. Additional slots will be released each day starting at 6:00 a.m. PT and a standby line will be available for those without a reservation. In accordance with Comic-Con’s COVID policy, proof of vaccination or a negative COVID test will be required for entry, along with face masks and identification.

Attendees can venture through the AHS Garden of the Dolls and get a chance to receive a makeup look by the artist who helped design the American Horror Stories dolls.

What We Do in the Shadows

Attendees are invited to immortalize their weekend with a photo inside the hippest new club at SDCC: Nadja’s – San Diego, a nod to the upcoming season.

In advance of the series premiere on Thursday, August 25 at 10 p.m. ET/PT on FXX, streaming next day on Hulu, attendees can descend into the Little Demon Den to experience the hilariously nightmarish underworld of this new animated comedy.

Fans can experience one night of hilarious fright by visiting the Little Demon Den for an exclusive screening of the series opener followed by the latest episode of What We Do in the Shadows, on Friday, July 22 from 8:00 p.m. – 10:00 p.m. More information regarding seat reservations to be released on FX’s social accounts.

Happening over all 4 days, the interactive experience guides attendees through a ceremonial dragon hatching, built to invoke “the sights and sounds of King’s Landing, interacting with people of the city, selecting their own dragon egg, and bravely demonstrating they are worthy of a bond with a dragon.” When it’s over, you’ll get a personalized dragon egg which they can hatch and then raise as part of an augmented reality app called “House of the Dragon: DracARys, available for download in the Apple and Google Play app stores starting July 20.

Hosted by AMC, attendees will, per the official description, participate in “a variety of exclusive experiences, designed specifically for San Diego Comic-Con,” including a “series set pieces, props and artifacts from all seasons.”

Fans can take photos or video, and watch “custom video content” showcasing moments from the show and messages from the cast and crew. AMC is also distributing custom “The Walking Dead” pins inspired by the show’s 11-season run along with one unique to the fan celebration. In addition, attendees can pick from 4 different exclusive t-shirts, get made up to look like a zombie, and enjoy exclusive food and drinks — plus, additional prizes will be given away via lottery.

10:45-11:45 a.m., BALLROOM 20: “The Rookie” and “The Rookie; Feds” – Nathan Fillion and Niecy Nash-Betts join executive producers Alexi Hawley and Terence Paul Winter to discuss the “The Rookie” and spinoff series “The Rookie: Feds,” coming to ABC this fall.

12:00 p.m., HALL H: “Dungeons and Dragons: Honor Among Thieves” — Paramount is bringing the film’s cast and creators to Hall H for a look at the upcoming film based on the classic role playing games. Attendees will receive a free collectible poster. 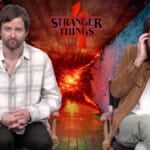 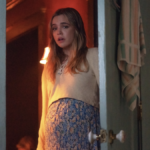 4:00-4:45 p.m.: FX’s “LITTLE DEMON”: Exclusive Pre-Series Premiere Sneak-Peek Screening and Q&A – It’s been long prophesized that a malevolent force would alter the universe for the rest of time, and you can get a front-row seat! Join FXX in celebrating its newest animated comedy, “Little Demon,” heading to the metaphysical realm of San Diego in advance of its August 25 series premiere. Thirteen years after being impregnated by Satan (Danny DeVito), reluctant mother Laura (Aubrey Plaza) and her Antichrist daughter, Chrissy (Lucy DeVito), attempt to live an ordinary life in Delaware but are constantly thwarted by monstrous forces, including Satan, who yearns for custody of his daughter’s soul. Join Danny DeVito, Aubrey Plaza and Lucy DeVito, plus creators Darcy Fowler, Seth Kirschner and Kieran Valla, and executive producer Dan Harmon for a not-to-be-missed exclusive screening, followed by an other-worldly Q&A moderated by TV Guide Magazine’s Damian Holbrook.Indigo Ballroom 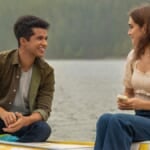 5:00-6:00 p.m.: FX’s “ARCHER”: Exclusive Season 13 Screening and Q&A – “Archer,” the award-winning animated comedy series, returns to San Diego in celebration of its upcoming 13th season! This year, Archer and The Agency have been acquired by the spy conglomerate known as IIA and struggle to find their identity. Will they be able to maintain their independence, or will they succumb to their corporate overlords? Join us for a not-to-be-missed exclusive screening of the season 13 opener, followed by a spirited Q&A with H. Jon Benjamin, Aisha Tyler, Chris Parnell, Judy Greer, Amber Nash and Lucky Yates, plus executive producers Matt Thompson and Casey Willis. Indigo Ballroom

Time TBD: “Black Adam” — Dwayne Johnson announced on July 7 that he’ll be taking his movie about the DC Comics antihero to Hall H, along with his co-stars who play the Justice Society — Aldis Hodge (Hawkman), Noah Centineo (Atom Smasher), Quintessa Swindell (Cyclone) and Pierce Brosnan (Dr. Fate). Plus the film’s director, Jaume Collet-Serra will be on hand. Hall H 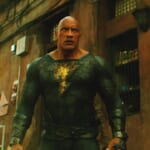 10:00-11:00 a.m.: “THE GHOST AND MOLLY MCGEE” – Join Creators/Executive Producers Bill Motz and Bob Roth and Executive Producer Steve Loter for a joyful celebration of this Disney Channel original series. Cast and crew will talk about their favorite moments, songs, and behind-the-scenes stories from season one, along with some fan surprises and hints at what’s to come in season two! The panel will be moderated by Doug Bensimon, executive director, Current Series, Disney Television Animation. Room 6A

11:30-12:15 p.m.: “THE SIMPSONS” – Join “The Simpsons” writers, animators — and special guest moderator, “Gravity Falls” creator and “The Simpsons” superfan Alex Hirsch — as they reveal the adventures planned for “The Simpsons” in season 34 and beyond! Take a sneak peek at Treehouse of Horror XXXIII — and the never-before-attempted bonus Halloween episode! That’s right — TWO HALLOWEENS IN 2022! Secrets will be revealed! Games will be played! And freebies — including original artwork — will be given away! Live in person for the first time since 2019! Come and be astounded at how we let ourselves go! Ballroom 20

12:30-1:45 p.m.: “AMERICAN DAD!” and “FAMILY GUY” -It’s a Smith-family Funday with “Steve” (Scott Grimes), “Klaus” (Dee Bradley Baker) and “Jeff Fischer” (Jeff Fischer) plus executive producer & co-creator Matt Weitzman, executive producer Joe Chandler, co-executive producer Nicole Shabtai  and moderated by “American Dad!” alum Jordan Blum who will treat “American Dad!” fans to a first look at scenes from all new episodes coming soon to TBS…plus a few other exciting announcements and surprises!
THEN
Join us for an exclusive, first look at “Family Guy’s” Season 21 premiere episode and watch the full episode months before the rest of the world! After, you will get special sneak peek at all of the hilarity and hi-jinks that will be coming next fall! Ballroom 20

5:30 p.m.: “The Resort” — the show’s first episode will be screened, followed by a panel discussion featuring creator Andy Siara and stars William Jackson Harper, Cristin Milioti, Luis Gerardo Méndez, and Nina Bloomgarden. It goes down in the Indigo Ballroom.

6:45 – 7:45 p.m.: “HAMSTER & GRETEL” – Join the cast and creative team behind Disney Channel’s “Hamster & Gretel”as they present a first look at the hilarious new superhero series before it premieres. Renowned animation veteran and creator Dan Povenmire, co-creator of the hit series “Phineas and Ferb,” will be joined by co-producer and story editor Joanna Hausmann, and select cast members (to be announced), for a discussion about the world and the characters of this new music-filled animated series, moderated by actress and comedian Liza Koshy. Room 6A

1:15-2:15 p.m: FX’s “WHAT WE DO IN THE SHADOWS” brings the World’s Greatest Vampire Nightclub to San Diego! Mix it up with the hottest vampires (and their familiar) to come out of Staten Island in hundreds and hundreds of years! Join special guests Kayvan Novak (Nandor), Matt Berry (Laszlo), Natasia Demetriou (Nadja), Harvey Guillén (Guillermo), Mark Proksch (Colin Robinson) and Kristen Schaal (The Guide) as well as Paul Simms (EP/writer), Stefani Robinson (EP/writer), Yana Gorskaya (co-EP/director/editor) and Kyle Newacheck (co-EP/director) for a spirited conversation and be among the first humans to set eyes on a brand-new episode. Do not miss this electrifying event! “What We Do in the Shadows” airs Tuesdays at 10 p.m. EDT/PDT on FX, streaming the next day on Hulu. BAAAaaaaat! Hall H