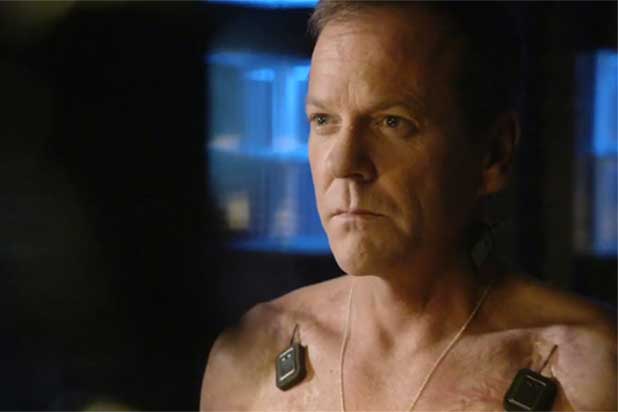 Kiefer Sutherland will take the stage at “24: Live Another Day’s” “Jack Is Back” event, which kicks off the festivities on Thursday, July 24 at 10:00 a.m.

Other lineup highlights include a “Sleepy Hollow” panel on Friday, an “American Horror Story: Coven” panel on Saturday, and an inside look at the seventh and final season of “Sons of Anarchy” on Sunday.

Fans of Fox’s animated TV shows should be happy, too — “Family Guy,” “The Simpsons,” “Bob’s Burgers,” “American Dad” and relative newcomer “Brickleberry” will each have their own panels.

THURSDAY, JULY 24:
10:00-11:00: 24 — JACK IS BACK at Comic-Con, DAMN IT! Kiefer Sutherland takes the stage to celebrate 24’s most iconic moments and highlights of Jack Bauer’s triumphant return in 24: Live Another Day. Catch the exclusive sneak peek at highly-anticipated Blu-ray and DVD featurette, “Worlds Collide,” illustrating how the pulse-pounding storytelling was created for this thrilling new season. Screening and discussion moderated by Executive Producer Jon Cassar to be followed by fan Q&A and more. Ballroom 20

12:30-1:30 Exclusive first look at TNT’s Legends! From Homeland producers Howard Gordon and Alexander Cary and Fringe co-executive producer David Wilcox, and starring Sean Bean (Game of Thrones), this new suspense-filled drama centers around, an undercover agent working for the FBI’s Deep Cover Operations (DCO) division with the uncanny ability to transform himself into a completely different person for each job. But after an encounter with a mysterious stranger, he begins to wonder: Is he the man he believes himself to be? Following the screening, stars and producers will provide fans with an exclusive sneak peek at this new series and an opportunity to hear about the exciting first season. Room 6A

SATURDAY, JULY 26:
10:00 -11:00 The Simpsons — Celebrate the 25th anniversary of The Simpsons — no gifts please — with creator Matt Groening, Executive Producer Al Jean, Supervising Director Mike Anderson and Director-for-life David Silverman. Topics include the new Treehouse of Horror, Simpsorama, a visit from Homer Simpson and much much more. Ballroom 20

2:00-2:45 American Dad — Join us for an exclusive look at the new season of American Dad–soon to be in all new episodes on TBS — as well as a Q&A with fans featuring Dee Bradley Baker (Phineas and Ferb, Star Wars: The Clone Wars) and Executive Producers Matt Weitzman and Brian Boyle, and more. Ballroom 20

5:45-6:45 Salem — Join the star-studded cast including Shane West (Nikita, The League of Extraordinary Gentlemen), Janet Montgomery, Seth Gabel, Ashley Madekwe, Iddo Goldberg and Elise Eberle along with Executive Producers Brannon Braga (Star Trek, Cosmos: A SpaceTime Odyssey), Adam Simon and Josh Barry for a look back at intriguing footage from the groundbreaking first season of the series, from WGN America and Fox 21. Set in the volatile world of 17th century Massachusetts, Salem explores what really fueled the town’s infamous witch trials and dares to uncover the dark, supernatural truth hiding behind the veil of this infamous period in American history. Moderated discussion will be follow-up by an audience Q&A. Room 6DE