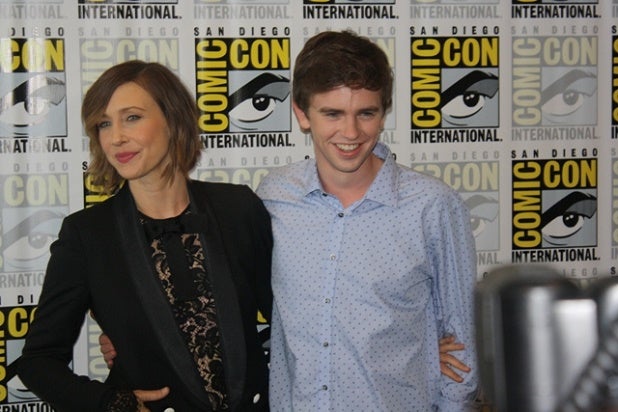 At the intimate panel for “Bates Motel” at Comic-Con 2014 in San Diego on Friday, the show’s screenwriters revealed that Norman Bates will go where Norman hasn’t gone before.

Most film enthusiasts are familiar with Norman, the character played by Anthony Perkins in Alfred Hitchcock‘s iconic film “Psycho.” While the story is moving forward towards the eminent confrontation between Norman and his mother in A&E’s version, it won’t necessarily follow a linear progression, say screenwriters Carlton Cuse and Kerry Ehrin.

They want fans to like Norman, and to understand where he came from before he went psycho, they told the crowd. They’ve achieved this brilliantly in the first two seasons of this show.

Casting baby-faced Freddie Highmore in the title role gives this otherwise disturbed character a very endearing quality. In the current season, during Norman’s teenage years before his psyche unravels, it’s revealed that he has a love interest. He also discovers that he has dark side, but doesn’t quite know what it is, and Norma Bates refuses to tell Norman what happens during his blackouts.

The tenderness in Vera Farmiga‘s portrayal of Norma Bates is exquisite and quite relatable because as she said at the panel, “Norma is a mom who is trying to fiercely protect her child.”

Farmiga was also quick to explain that in this, and possibly in upcoming seasons, we’ll see that Norma is not an evil mother.

Also read: Stephen Colbert Dresses as Spy to Host ‘The Hobbit’ at Comic-Con

“Norma is traumatized. She’s been dealt a bad hand. She thinks she can love her son out of his illness,” Farmiga said. Norma Bates’ struggles in this regard are formidable.

Then there’s the handsome Sheriff Alex Romero played by Nestor Carbonell (“Lost”), who may be smiling a little more in the upcoming season. Why? Well, Carbonell was coy and wouldn’t confirm or deny that a relationship might be in Romero’s future.