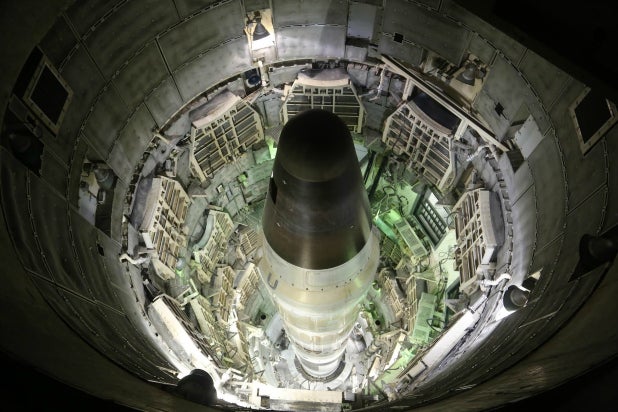 With the Cold War cooled and the nation’s fears focused on individual terrorists rather than rogue states, it’s easy to overlook the fact that the U.S. still has an arsenal of some 4,500 nuclear warheads. But forgetting that would be an enormous, and potentially fatal, mistake, as Robert Kenner‘s nerve-wracking documentary “Command and Control” makes clear.

Working from Eric Schlosser’s book, “Command and Control: Nuclear Weapons, the Damascus Accident, and the Illusion of Safety,” Kenner’s movie proceeds like a real-life thriller, one with striking parallels to its narrative contemporary “Deepwater Horizon.”

Like the oil rig’s roughnecks, the heroes of “Command and Control” are the people tasked with doing a dangerous job to protect the American way of life, and the villains are the by-the-book bureaucrats — corporate in one instance, military in the other — who get in their way. The difference is that the Deepwater Horizon’s crew numbered 126 men and women, while the accident at a missile silo in rural Arkansas could have killed tens of thousands, if not millions.

Kenner (“Food, Inc.”) and Schlosser (author of “Fast Food Nation”) — the latter is credited as a co-writer on the film and is also one of its interview subjects — point out that the history of nuclear armaments has always been fraught with risk. As Schlosser points out, some of the scientists involved with the first A-bomb tests feared the explosion could start a chain reaction that would ignite the Earth’s atmosphere, which could have killed every living thing on the planet. They tested it anyway.

Warheads have to be simple to fire, so that their operators don’t hesitate in the critical instant, but effectively impossible to launch or detonate by accident, a formidable challenge met, Schlosser says, by the extraordinary efforts of scientists and technicians and military personnel — but also by luck. And luck, as he says, always runs out.

It wasn’t just bad luck that happened on September 18, 1980, when airman David Powell put a three-foot-long wrench to the top of a Titan II missile and accidentally let the socket drop; recent directives said he should have been using a less unwieldy torque wrench, and his failure to report the incident for an hour was more than a simple twist of fate. But had that socket not skittered off the catwalk and plummeted 70 feet to the missile’s base, and had it not ricocheted off the launch mount with enough force and at the proper angle to knock a hole in its fuel tank, perhaps nothing would have happened. Or perhaps it could have been worse.

In any case, the silo began to fill with fuel, and as the fuel leaked out, the structural integrity of the rocket holding the nuclear warhead at its tip aloft began to be threatened. It was several time bombs ticking at once, a situation no one knew how to fix and whose potential consequences no one could predict.

The Damascus incident isn’t all there is to “Command and Control,” which incorporates accounts of numerous other terrifying close calls. But none were quite so close, so the film keeps circling back to Arkansas, 1980, as the situation worsens and the distant higher-ups hem and haw about what to do next. Although we hear from plenty of scientists, sometimes getting bogged down in technical discussions about the Titan II’s fuel oxidizer, its heart is with the rank and file, the on-the-ground experts who knew the missile inside and out and whom, the movie finally suggests, the military essentially threw away after the fact.

Also Read: Magnolia Pictures Acquires Raoul Peck's 'I Am Not Your Negro'

There were discharges and reprimands instead of medals and commendations for these brave men, although some of them were severely injured while acting to prevent potential casualties. Kenner and Schlosser argue firmly that those efforts would have been wholly successful had the base’s personnel not been left to idly stand by while their superiors twiddled their thumbs.

As it was, there was only one fatality, but that death, along with the potential of how many more could have been, clearly haunts some of the men to this day: Powell says that, more than 35 years later, he can still conjure up at any moment the image of that socket tumbling through space, his hand reaching for it and grasping at air.

“Command and Control” doesn’t induce that level of immediacy: Despite the use of reenactments, its past never quite merges with the present. As with most documentaries drawn from books, it feels like you’re getting the Reader’s Digest condensed version, handy for those who have 90 minutes to spare but no substitute for the real thing.