Robert Downey Jr.’s brash, spirited performance in the title role of the Guy Ritchie film “Sherlock Holmes” may have taken home a Golden Globe on Sunday night, but a different – but equally bold – aspect of the film has a better chance to draw attention from the Academy. Hans Zimmer’s score turns action-movie music on its head, using a small group of acoustic musicians to whip up a playful, dynamic, inventive folk-based sound that plays a dominant role in the film as it trashes and reinvents the conventions for this kind of movie.

The German-born composer talked to theWrap about the film in his Santa Monica studio, where he composes in a remarkable room that manages to combine thick carpeting, plush red couches and dark carved wood bookcases with a huge array of computers, synthesizers and recording equipment.

The conversation was interrupted several times by urgent conversations about music the prolific composer had written for an upcoming episode of “The Simpsons,” which apparently hadn’t quite passed muster with that show’s producers. 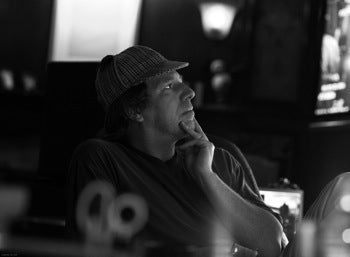 Scores to movies like “Sherlock Holmes” are usually big, bold and orchestral. Yours is certainly bold, but the big orchestra is missing.
It’s a really exposed score. An orchestra has a great way of homogenizing things, and it’s a fantastic sound. But that’s not what I wanted to do. I really wanted you to hear the virtuosity of each player.  I think that that was my way of figuring out how to play what goes on in Sherlock’s head, which is virtuoso synapses firing.

You wrote an action-movie score that uses fiddles and banjos. Did you ever think, are they really gonna let us get away with this?
I really thought they weren’t gonna let us get away with it. And there were questions about it. The proof of the pudding, really, is when you show it to an audience. Because part of how you get through it up to that point is by being reckless, or by pretending to be reckless, and saying, “Oh no, it’s great, you’ll love it.”

But, I mean, I’m very insecure. I knew what I wanted it to be. I’m the only person who hears it in his head, and it’s not something you can describe and talk about. Music is this odd beast. We can have a long conversation about it, but it doesn’t mean anything until I write the piece, orchestrate the piece, play the piece for you and look in your eyes. And it either moved you or it didn’t. If it doesn’t touch you in the right way, it’s a do-over. But they liked it.

Did you consider any sequences particularly risky?
There’s a scene where we have a lot of explosions, and Watson almost gets blown up. And we knew we needed something bold that could show these explosions in a different light than the standard action music. It wound up being a heartfelt solo violin piece. And that was dangerous territory, because you’re taking away something that the audience is comfortable with.

Part of the job is to do something new, but you don’t want to alienate your whole audience. At the end of the day, I was fully aware that we were doing a big Warner Bros. Sherlock Holmes movie, and just trying to approach it from a more quirky perspective.

It strikes me that although the score uses acoustic instruments, it has a rock & roll attitude.
Yes. And you know, I felt there was nothing wrong with using the words hip-hop occasionally when you were describing to a violinist how you wanted a phrase played. One of the things I love about musicians is that a good musician is a good musician, and sometimes it’s good to take his instrument away.

I did that with the percussionist. I said, “Okay, you’re not allowed to play your drums. You get to keep your drumstick, but whatever it is you see in this room, you’re allowed to play. So you can still do your cool rhythms playing on a brick or something.”

How did you hit on your musical approach to this score?
Guy Ritchie and I just started talking about music that we liked. We liked Irish pub bands a lot, and we liked people who played instruments boldly, and with conviction. My references became more and more Kurt Weill, and “Threepenny Opera.” And thinking, Brecht and Weill actually described some sort of a London that doesn’t exist, that never existed, but did exist the way Guy is describing an imaginary Victorian London.

We also talked a lot about gypsy music, and about the idea of having not violins, but fiddles. It’s the same instrument, but a different way of approaching it. And banjos haven’t had a big outing, I think, since “Deliverance.” I think they needed exonerating. It was as simple as that. And at the same time, a lot of the rhythms and the productions are straight out of modern hip hop.

Was it tough to get that blend right?
It was a very long process. The simpler I made it, and the more I stripped out, the harder it got. And what took so long was to get rid of things. To make holes, and to make things bold, and to get performances. Plus it’s a comedy, so you have to navigate around the jokes without anybody noticing that you’re navigating around them. I think every thing I ever learned about film music got used up, every bit of experience I possibly had got thrown into this one.

Right from the start, the music sets a pretty quirky and playful tone.
I think quirky was a good word. And I wanted to use that little bit of cinematic real estate I had over the logos to say to the audience, okay you can have a little bit of a laugh. 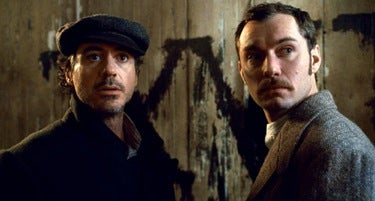 With some great film scores, the idea is to be subtle, to stay in the background, to underline what’s going on without calling attention to itself. But in this case, the score is not subtle. It’s assertive. This isn’t a shy score.
No, there isn’t anything shy about it. I felt the last thing you wanted to be in this movie is shy. Yeah, there are scenes that are carefully underscored and are in the background, usually the Irene Adler scenes.

But on the whole, the idea was to be bold, to amplify the characters, or to be another character in the movie. Have a voice, have a point of view, and let that point of view be known.

I wanted to make it sound different. One of the dilemmas I have of course is that people usually only remember my big numbers. They don’t really know about “Frost/Nixon.” They think all I’m doing is these big blockbuster type things like “Crimson Tide” or “Gladiator” or “The Dark Knight.”

Speaking of that last score, you ran into problems with the Academy last year, when they initially disqualified it because too many people were listed on the cue sheet, which determines who receives royalties. It wasn’t the first time you’ve had that argument with them.
They don’t understand. I actually think their point of view is sort of right on one hand. They want to know whose point of view it was. Who did the overall artistic design? And that makes sense.

But at the same time, it shouldn’t get judged on the cue sheet. The cue sheet, to me, is strictly an invoice for the performing rights society. It’s a way of having people included in the success of the project. And the argument I’ve been having with the Academy for years is please don’t judge who is the main architect of this music from the cue sheets.

I mean, look at the economy now. I have to be able to protect my team. I’d rather not be part of the Oscars if I can’t go and do the right thing. If it means I have to be excluded from playing the game, so be it.

What do you think of their choices in music?
Quite honestly, I question … I’m blowing my own trumpet here, but in the contest of this conversation maybe I can without it becoming hideous. Let’s stick with “Dark Knight” for a second. Guy was telling me that when he was cutting “Sherlock Holmes” in London, in the building there were lots of movies going on. In every room he went by, somebody would be using a bit of “Dark Knight” as their temp score. It is an iconic score that influenced the music, for better or worse, for the next few years.

And by the way, I’m saying this in the light of having won an Oscar [for the score to "The Lion King"]. And it meant a lot to me. I can honestly say it really meant something. Not in a bolstering-my-ego type of way, but more in my peers actually thought I did good work. It’s one thing your wife saying it, it’s another thing Jerry Goldsmith or Elmer Bernstein saying it. So I’m saying that the Oscars are important to give us artistic courage. But I also think the Academy has a responsibility to keep relevant.