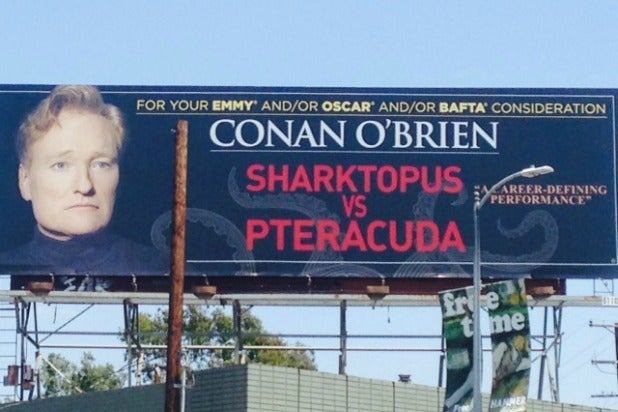 Conan O’Brien is probably an Emmy lock for his upcoming role in SyFy’s “Sharktopus Vs. Pteracuda,” but the “Conan” host is taking no chances.

O’Brien has taken out two billboards — one in Times Square and one in Los Angeles’ “historic brakes and alignment district” (near the corner of Washington and La Cienega) — to seek Emmy voters’ consideration for his role. He announced the billboards on his show last week.

A few clarifications: “Sharktopus Vs. Pteracuda” is a real movie, and O’Brien is really in it. It is a sequel to 2010’s “Sharktopus,” and both films are produced by Roger Corman.

Unfortunately, the film’s Aug. 2 premiere makes it too late to be considered for the Emmys this year, especially since nominations have already been announced. O’Brien, a three-time winner, was not nominated this time, but he did hedge his bets: His billboard also seeks the consideration of Oscar and BAFTA voters.

The billboard finds O’Brien in full stage makeup, looking out over a particularly forlorn stretch of the L.A. River. It makes his longing expression all the more poignant.

“Plus, I got a great discount on this billboard because the billboard has a partially obstructed view,” O’Brien said.

Here’s hoping the billboard is more popular than the ones for “The Strain.”