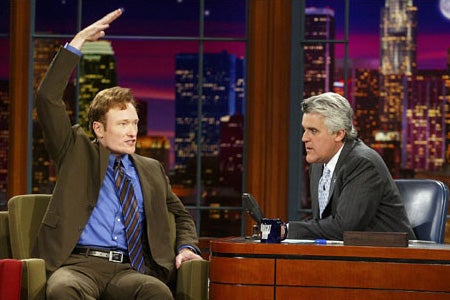 Like a lot of people, I think Conan O’Brien is getting screwed by NBC. Royally.

Jeff Gaspin, the network’s entertainment chief, said on Sunday that it was his decision — not Jeff Zucker’s — to give Jay Leno his old time slot back, forcing Conan to step back or jump ship … to the one steered by Rupert Murdoch.

If Zucker did have anything to do with screwing Conan, it wouldn’t be the first time. Check out this now-prescient quote from O’Brien in a 2004 BusinessWeek article about Zucker’s rise to power at NBC:

Too small to pursue his fantasy of playing football for the Miami Dolphins, Zucker took to writing local sports stories for The Miami Herald. He continued his writing career as an undergraduate at Harvard University, where he covered sports for The Harvard Crimson. He later became president of the publication. It was at Harvard that Zucker first met Conan O’Brien, now an NBC late-night host, who worked for humor magazine the Harvard Lampoon. As a prank, O’Brien’s staff stole all the Crimson issues one day before they could be delivered. Zucker called the cops. "My first meeting with Jeff Zucker was in handcuffs, with a Cambridge police officer reading me my rights," says O’Brien.