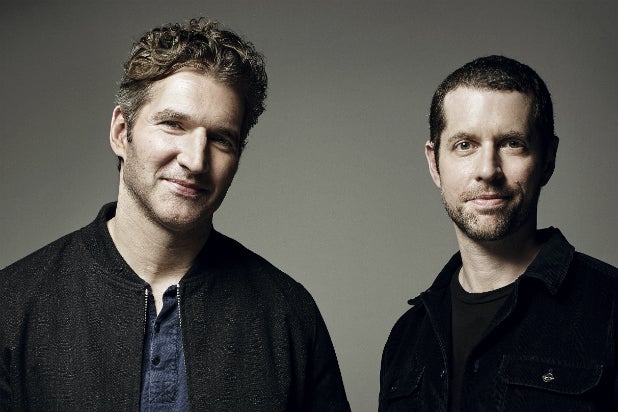 When the “Game of Thrones” creators announced their next project — “Confederate,” an alternate-history series that imagines a different outcome to the Civil War — on Wednesday, they knew there would soon be backlash.

“We all knew [the backlash] was coming in one form or another,”D.B. Weiss told Vulture in an interview Thursday night along with partners David Benioff, Malcolm Spellman and Nichelle Spellman. All four will be executive producers and writers for the upcoming drama.

“You’re dealing with weapons-grade material here,” Spellman told Weiss and Benioff when they first started to talk about the project.

Indeed, the backlash was swift and fierce online. On Twitter, Weiss and Benioff were accused of wanting to whitewash history. “It is exhausting to think of how many people at @HBO said yes to letting two white men envision modern day slavery. And offensive,” one user wrote.

“This sounds like a wish fulfillment drama for somebody, but not me. They lost me with ‘a world where slavery was NOT abolished,'” actress Yvette Nicole Brown tweeted. And another Twitter user added, “So is the goal here to let racists all over know the blue print on how to bring slavery back?”

But the producers of “Confederate” want everyone to know that, no, this will not be glorifying slavery. “I think what was interesting to all of us was that we were going to handle this show, and handle the content of the show, without using typical antebellum imagery. There is not going to be, you know, the big “Gone With the Wind” mansion,” said Nichelle Spellman, who previously worked on “The Good Wife.”

“This is present day, or close to present day, and how the world would have evolved if the South had been successful seceding from the Union. And what was also exciting to me was the idea that in order to build this, we would have to rebuild world history,” she continued. “‘OK, if this had happened here, how did the rest of the world change?’ That was another huge bonus factor for me — the idea of rewriting some of the history of, like, the French Revolution. What happened in the entire world if that one event had ended differently?”

“This is not a world in which the entire country is enslaved. Slavery is in one half of the country,” Spellman, an “Empire” alum, added. “And the North is the North. As Nichelle was saying, the imagery should be no whips and no plantations.”

The producers said that while the concerns expressed by many online are valid, people should reserve judgement for the premiere of the show to see whether or not they really do fail. “I wish their concern had been reserved to the night of the premiere, on HBO, on a Sunday night, when they watched and then they made a decision after they watched an hour of television as to whether or not we succeeded in what we set out to do,” Spellman said. “The concern is real. But I think that the four of us are very thoughtful, very serious, and not flip about what we are getting into in any way.”

In response to the idea that the show will end up as wish-fulfillment for white supremacists, Spellman said “what people need to recognize is … the sh– is alive and real today. I think people have got to stop pretending that slavery was something that happened and went away. The sh– is affecting people in the present day.

“And it’s easy for folks to hide from it, because sometimes you’re not able to map it out, especially with how insidious racism has become,” he continued. “But everyone knows that with Trump coming into power, a bunch of sh– that had always been there got resurfaced. So the idea that this would be pornography goes back to people imagining whips and plantations. What they need to be imagining is how f—ed up things are today, and a story that allows us to now dramatize it in a more tangible matter.”

You can read the entire interview on Vulture, here.