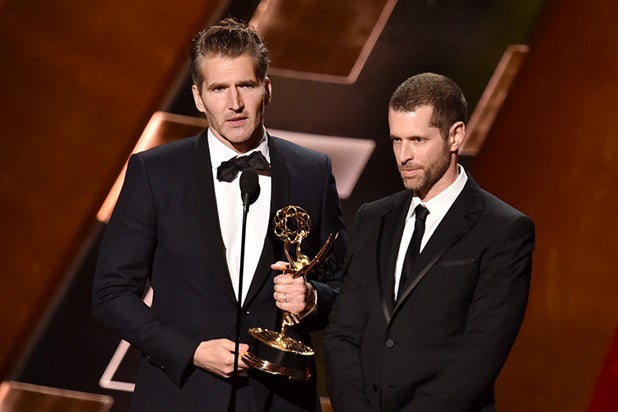 Like their HBO hit “Game of Thrones,” David Benioff and D.B. Weiss’ newly announced follow-up series, “Confederate,” has people talking — though some wonder if the two white men will handle the subject responsibly.

“Confederate” takes place in a world where the southern states won the Civil War and seceded from the Union. Its creative team includes African-American writers and executive producers Nichelle Tramble Spellman and Malcolm Spellman. HBO says it “takes place in an alternate timeline, where the southern states have successfully seceded from the Union, giving rise to a nation in which slavery remains legal and has evolved into a modern institution.”

Twitter users seem to have honed in on that last part, categorically objecting to the idea of a series that imagines slavery as “a modern institution.”

“It is exhausting to think of how many people at @HBO said yes to letting two white men envision modern day slavery. And offensive,” wrote author Roxane Gay in response to the announcement.

“The writers of a fantasy show with no black people cant wait to write a fantasy show where the black roles are… slaves,” wrote The Daily Beast’s Ira Madison III in one of several tweets about the show.

Others cautioned patience given the relatively few details released about the show at this point in the development process. “Confederate” isn’t scheduled to being production until Weiss and Benioff complete production on “Game of Thrones,” which is still more than a year away from its conclusion.

“OR….just spitballing here…we could review the new show AFTER it exists,” wrote “Five Came Back” author Mark Harris. “Doing a quick search now for all your outraged hot takes when ‘The Man in the High Castle’ was announced. Be back soon, or possibly never.”

In another tweet, Harris also referenced “The Handmaid’s Tale,” the acclaimed Hulu series based on Margaret Atwood’s classic novel, which similarly envisions a dystopian future.

“Politically charged speculative alt-America fiction is a big category. I don’t assume bad faith any more than I would for Handmaid’s Tale,” he wrote. “And ‘stay in your lane/this is not your story to tell’ isn’t how I approach art, artists or pop culture. We can differ on that. Politely.”

See some of the tweets below:

HBO was like, "We gave y'all a 2nd season of Insecure..now you'll deal with the Confederate.."

It is exhausting to think of how many people at @HBO said yes to letting two white men envision modern day slavery. And offensive. https://t.co/xsxWJ6FHUv

Confederate can be made. And people can think it's a lousy premise. It's fine.

OR….just spitballing here…we could review the new show AFTER it exists.

…and "stay in your lane/this is not your story to tell" isn't how I approach art, artists or pop culture. We can differ on that. Politely.

Finally, a way for us to imagine what it would be like if racists ran America. https://t.co/i13aaS6tCE

This sounds like a wish fulfillment drama for somebody, but not me. They lost me with "a world where slavery was NOT abolished." ???? #IssaNo https://t.co/4mI5yHVq6i

So is the goal here to let racists all over know the blue print on how to bring slavery back? #askingforfriend https://t.co/7f9WLYTDvP

1st thought: "Love alt-history, but this'll be a nightmare"

The hardest of hard passes. https://t.co/A5pG0JJ4Fz

Literally the only positive to take from this is to remind yourself, if you’re worried about telling your story, that it’s not this bs https://t.co/GurLWb3a0b

They have two black writers joining but Benioff and Weiss are the exec producers. Also the idea is messy whoever writes it. No thanks.