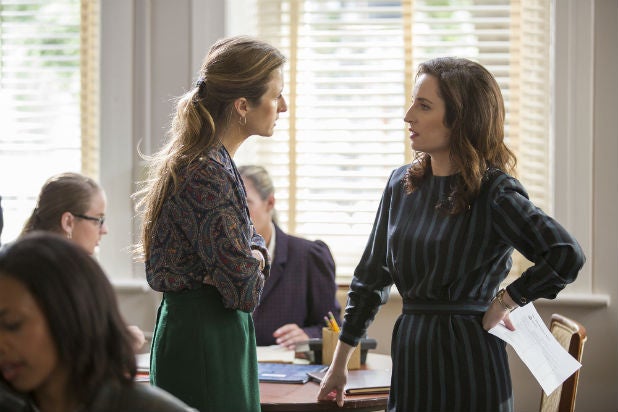 “Confirmation” star Zoe Lister-Jones believes that women in our society deal with sexual harrassment on a shockingly regular basis.

“I think every woman deals with sexual harassment blatantly pretty regularly,” Lister-Jones told TheWrap. “We’ve all been pretty conditioned to accept a certain amount of objectification. It just comes with the territory.”

“Confirmation” stars Kerry Washington as Anita Hill, the woman who accused then Supreme Court-nominee Clarence Thomas of sexually harassing her in the workplace years earlier. Lister-Jones, who plays Congressional aide Carolyn Hart, said she has dealt with explicit harassment in her own life.

“[In] terms of really overt, egregious sexual harassment the only thing that I really experienced was in college,” she said.

Lister-Jones went on to detail her own personal experiences with the disturbing issue.

“I had a male teacher whom I felt was very inappropriate with female students. I spoke out against him and took it to the dean that he threatened to fail me,” she said. “It became a very contentious environment especially as a student. I had to basically demand that I not be in his class again but that took me going all the way to the dean to make that happen.”

Lister-Jones went on to say that her memories of the Anita Hill hearings inspired her to come forward. “Something about her testimony remained a part of my character and how I felt that women should have a voice in those situations,” she said. “They should be able to be heard rather than cower in the face of those situations.”

And while some have criticized the film as biased, Lister-Jones believes that Hill’s story is one that needs to be told today.

“For me, Anita Hill is one of our great unsung national heroes,” she said. “I think the film itself is actually quite fair but for me personally I’m excited for her story to be told to a new audience and an audience that may have forgotten, because I think her bravery went largely unnoticed and it had incredible reverberations on gender equity in this country.”

“Confirmation” debuts this Saturday at 8 p.m./7c.