Producers Peter Schneider and Don Hahn oversaw the making of such Disney classics as “Sleeping Beauty,” “The Little Mermaid” and “Beauty and the Beast.” They also witnessed first hand the dissolution of the Disney animation machine back in the early ‘80s — and the reconstitution that followed under the aegis of Michael Eisner and Jeffrey Katzenberg.

Currently, Hahn is producing "Frankenweenie" for Tim  Burton (and Disney), and Schneider has his own independent Broadway and film company, with financing through Disney. 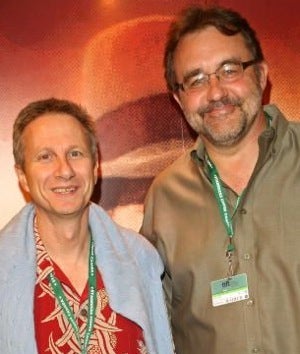 What were the events that set in motion the leadership transition back in the ‘80s?

D.H. (at right in photo): There was a flash point that happened in 1984 when financier Saul Steinberg attempted his raid on the company. He came in and said, “I’m just going to buy the company and break it up.” He failed, of course, but that freaked out Roy Disney. He said in his interviews, “We have a responsibility, on some level, to do something about it.”

But things already had begun to change — Touchstone label was started, the Disney Channel was started, Ron Miller had some early success — it just wasn’t happening fast enough to the degree that we could fend off corporate raiders. So Eisner and Wells were brought in, and Roy really stepped in and changed the culture of the company for the first time.

It wasn't easy. There was a fear to change things. There was a little bit of the feeling that we make Disney animated features, people love them, let’s just keep making them.

Eisner was hesitant to participate in the film. What was holding him back?
D.H.: He would say, “I’m not sure I want to be involved with this. Good luck with that. And by the way, here’s a tape of me and Diane Sawyer. And I don’t want to be part of this. I really don’t feel like — here’s a memo I wrote.”

P.S.: But we got some spectacular interviews with Mike — and he gave us the quote at the very end, which is my favorite quote in the movie: “It’s not about bricks and mortar, it’s about the human condition.” It was a quote we got early on and said, “That’s our movie”

What were your favorite things about working with Jeffrey Katzenberg?
P.S.: Oh my God!

P.S.: What he brings to the table is that when he heard a good idea, he’d change his opinion. So that he would come in and say, “I want it this way!” And then you would say, “I don’t think you do. You want to think about this, this and this.” And he would go, ‘Oh, that’s a better idea.”

That’s a terrific thing to learn from somebody: have a strong point of view, be passionate about your point of view, listen really well, and change it.

His default position in the film seems to be, “It’s not working, guys.” And he says that about things that are obviously working beautifully.
D.H.: Well, he certainly tested us — and for me he brought discipline to the process that didn’t exist there before. We get a lot of people say, “Oh, Jeffrey, he’s really like the villain.” And that’s so not so. He starts out by not understanding the process, not wanting to be part of it, and he ends up leading — and still is. He’s really our hero of the piece.

OK but what’s the worst thing about working with Katzenberg?
P.S.: Oh, we’re not here to talk about Jeffrey!

Well, in the movie, the breaking point between Eisner and Katzenberg comes over plans for the new animation building being announced without consulting Katzenberg. Was there more to it than that?
D.H.: Part of it was the relationship between Jeffrey and Michael — and Frank Wells’ death played into that. Jeffrey’s expecting to get Frank’s job was just another bump along the road. I think, in a funny way, the building probably was the first very public way that we saw that there was just not a respect for Jeffrey and what he was doing at the studio.

More than real substance, it was style maybe led to these clashes.

Are there any parallels between regime change then and the current regime change at Disney?
D.H.: You can never compare it directly to that time because the audience was different, films were different. We felt like if we went out on 1,200 screens, it’s a huge broad release. Now, if you have less than 3,000, you have a small release.

P.S.: It was really clear 25 years ago, 1984, that this company was a $3 billion company. And it wasn’t working in many ways. Today it’s a huge media company. It’s got ESPN, ABC, Disney and parks and consumer products and media groups and Disney Channel. This company’s firing on all cylinders. So we’re not going through a revolutionary change, which is, “It doesn’t work! Oh my God, get rid of everybody, let’s start again!” This is about the evolution of the company, not about restarting the company.

In the movie, Katzenberg is quoted as saying, “We're not interested in the Academy Award, we're going for the Bank of America,” meaning box office is more important than excellence. Will the Bank of America award take precedence over winning Oscars at Disney? 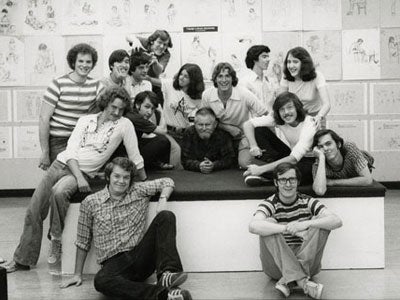 D.H.: It’s a danger, though, because we’re in the world of franchise moviemaking. If I hear the word “franchise” one more time, I’m going to puke.

Dick Cook signed off on your picture. What about Bob Iger and Rich Ross?
D.H.: It was done before Dick left, actually. And we wanted to do it somewhat in the open, so we showed to everyone. Jeffrey, Michael, Roy saw it. Iger saw it. So it was widely viewed.

P.S.: And well supported. It’s about a very interesting period of time. It’s quite honest, and the company hasn’t shied away from its honesty. And that, to me, is really joyous.