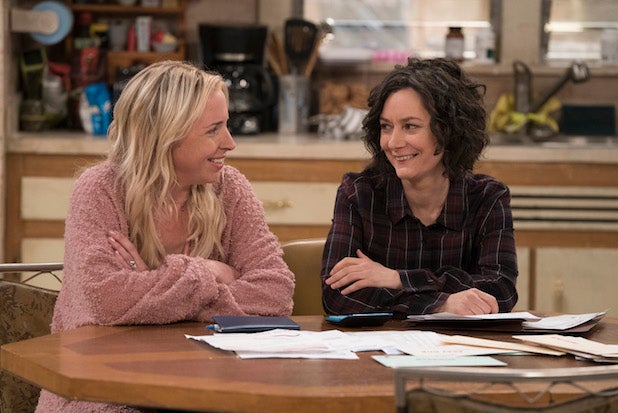 (Spoiler warning: This post contains spoilers from Tuesday’s premiere of “The Conners”)

ABC’s “The Conners” debuted on Tuesday, finally revealing how Roseanne Barr was killed off of her own sitcom.

The premiere episode picks up three weeks after the family matriarch’s death, with the entire family believing her to have died of a heart attack. It’s not until Jackie (Laurie Metcalf) gets a call from the coroner’s office that they learn that she really died in bed due to an opioid overdose.

“With her health issues, it was enough to stop her breathing,” Jackie says.

The episode follows the revelation that Barr’s character had become addicted to painkillers in the wake of a knee injury last season. Though the season finale originally seemed to point toward a happy ending to that particular storyline, those plans were forced to change when Barr was fired by ABC in May over a racist tweet.

Throughout the premiere, Dan (John Goodman) struggles to accept that Roseanne died of an overdose despite claiming to be clean. In his grief, the widower turns ire toward Marcy Bellinger, the woman whose name was on the bottle of pills that killed his wife, but he’s forced to confront the fact that his wife was an addict who stashed painkillers from anywhere she could get them.

Darlene (Sara Gilbert) and Becky (Lecy Goranson) try to fill the hole left in their family’s lives left by their mother’s absence by taking on additional responsibilities, and Jackie commits herself to cleaning and reorganizing every part of the Conner house because she can’t bear to leave.

Barr had previously spoiled the fact that her character would die of a drug overdose, calling the move “cruel” in an interview on a right-wing YouTube channel. “It wasn’t enough to do what they did to me,” she said at the time. “They had to so cruelly insult the people who loved that family and that show.”

In an interview on “Good Morning America” ahead of the premiere, Gilbert, who also executive produces the sitcom, said reorienting the show post-Roseanne was an “emotional” process.

“But then I think what it allowed us to do is almost every person at some point in their life redefines their family without the matriarch, and so it gave us a chance to look at, how does it affect the family? How do different people fill in different roles and lean on each other?” Gilbert said.

Also Read: 'Kids Are Alright' Creator Really Wants You to Watch 'The Conners' - for Professional and Personal Reasons

For her part, Barr described her post-“Roseanne” life in an episode of “VICE News Tonight” timed to the premiere of “The Conners.”

“I’ve got a lot of time for real life, real-life stuff,” she said. “Like, just going for a walk with my mom and having an ice cream cone. Stuff like that. Waiting in lines, I’ve really been sleeping a lot, like, probably 17 hours a day.”