“Beatriz at Dinner” threw a lucrative party at the speciality box office this weekend, and earned raves for its leads Salma Hayek and John Lithgow at Sundance in January.

But the Miguel Arteta-directed film has a secret weapon in Connie Britton, who plays the hostess of the titular dinner party from hell — where classes, social graces and ideology clash at stunning Malibu mansion.

If you’ve spent any time in the Los Angeles social nexus, where Hollywood and its related industries gather to flatter each other, you know how perfectly Britton captures the archetype. The actress is certainly familiar with it.

Britton plays Kathy, a definitive modern and monied hostess. Hayek’s Beatriz is her personal masseur, a friendship that sparked when Kathy’s young daughter underwent chemotherapy and Beatriz acted as her nurse practitioner.

“She’ll go to the ends of the earth for Beatriz. She wants to repay her and do right by her. But her relationship with Beatriz is really about herself,” Britton told TheWrap.

“In reality, Kathy lives this life of privilege and luxury, and she doesn’t really want to look outside of that,” she said.

She doesn’t get much of a choice in the film, written by “Enlightened” creator Mike White. After an appointment at Kathy’s cliff’ edge home, Beatriz’s car breaks down hours before her boss is to host a major real estate mogul (Lithgow), his wife (“Transparent” star Amy Landecker) and an upstart couple in Jay Duplass and Chloe Sevigny.

Guilt-ridden and seriously late in starting her hair and makeup, Kathy invites Beatriz to stay for the  evening — a decision that sparks a series of unfortunate events over several pristine courses and plenty of booze.

Beatriz is alone in her purity and empathy for the human race, dining with capitalist nightmares and vapid wives. There’s a memorable scene by the pool before dinner, where the women in the group discuss a photo leak involving a Kylie Jenner-esque social media star — ones that graphically depict a venereal disease. 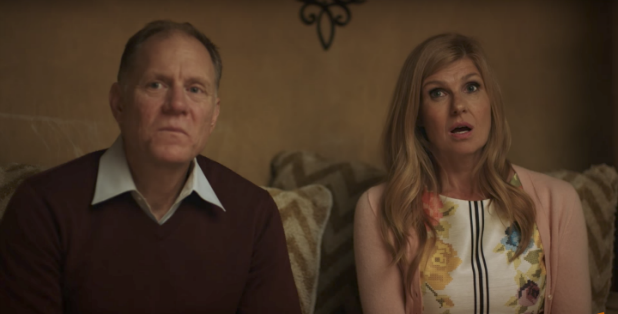 “We laughed so hard at that — that’s just one of those brilliant Mike White moments of writing, and it captures the truth of life and all of its vulgarity,” Britton said.

As Beatriz and Lithgow’s character’s sparring turns into an idealogical conflict, Kathy does her best to make polite apologies and change the subject, but the damage is done. And her own husband blames her for the generosity of spirit.

“There is an exploration of denial, and everyone’s level of denial, and I think Kathy’s marriage is not exempt from that. She and her husband need to maintain a kind of marital construct that is very relatable for many people,” Britton said.

“They are people who aren’t really seeing each other, they’re just bouncing off each other where they need to,” she said.

The better question: does Britton have any dinner party nightmares from her own life, as hostess or guest?

“If I do, I think I’ve blacked it out, that’s my own level of denial,” Britton said. “But I don’t cook. My friends know that when they come to my house, they’re bringing something or we’re ordering in. But we always have the best time.”

Roadside Attractions’ “Beatriz at Dinner” is currently in limited release.