A recent study says that conservative media consumers are not only more likely to believe COVID-19 conspiracy theories, but also more likely to resist to wearing masks and getting a vaccine.

Published last week in the Journal of Medical Internet Research, Daniel Romer and Kathleen Hall Jamieson surveyed 840 Americans in March 2020 and again last July to get their findings. 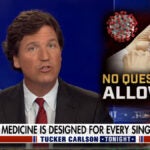 They noted that “conspiracy belief changes related to media use between the two waves of the study were associated with the uptake of mask wearing and changes in vaccination intentions in July.”

Romer and Jamieson placed responsibility for correcting this directly on the media itself: “The findings point to the need for greater efforts on the part of commentators, reporters, and guests on conservative media to report verifiable information about the pandemic. The results also suggest that social media platforms need to be more aggressive in downgrading, blocking, and counteracting claims about COVID-19 vaccines, claims about mask wearing, and conspiracy beliefs that have been judged problematic by public health authorities.”

The problem has been demonstrable on and ongoing. Last year, conservative channel OANN was banned from YouTube for a time for posting coronavirus misinformation. As recently as Monday night, Tucker Carlson, who hosts a conservative opinion program in Fox News’ top-rated primetime lineup, speculated with no evidence that COVID-19 vaccines are dangerous to pregnant women and said that college students don’t need them.