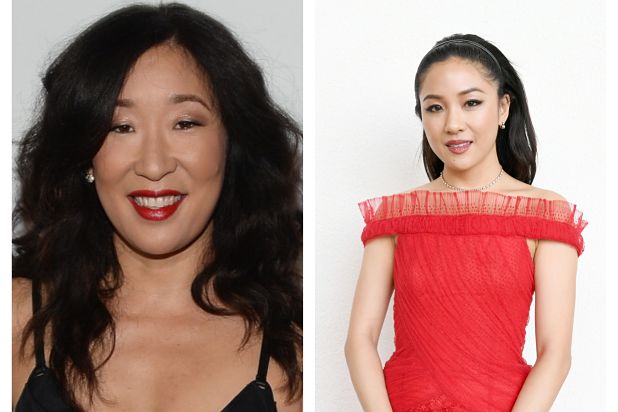 Golden Globes nomination day was one to celebrate for Asian Americans in Hollywood, as “Crazy Rich Asians” and its lead star, Constance Wu, earned nominations for Best Picture and Best Actress in a Musical or Comedy.

But that wasn’t the only big moment for Asians in Hollywood. For the first time on any major awards show — Oscars, Grammys, Tonys, Emmys or Golden Globes — an Asian will serve as host, as Sandra Oh is tapped to handle emcee duties for the Globes alongside Andy Samberg. And Constance Wu says it’s about time.

“It’s long overdue for Sandra to host,” Wu told TheWrap. “I remember reading an interview where she said that when she read the script for ‘Killing Eve,’ she assumed that she was being offered a supporting role. Those were the only kind of stories that have been offered in her career.”

“For a woman like her to assume that she isn’t getting offered leading roles, that in and of itself is a big indicator of the need for change. For a long time, people weren’t talking about that need, but now they are. And for her to be recognized for her role in ‘Killing Eve’ and to be hosting is just long overdue and I couldn’t think of anybody more deserving. It should have happened a long time ago,” Wu said.

Earlier this year, Sandra Oh’s performance in “Killing Eve” made her the first Asian woman to be nominated for a Best Lead Actress Emmy, and now she is adding a Golden Globe nomination to her list.

Wu is also making history, as she is the first Asian woman in 44 years to be nominated for Best Actress in a Musical or Comedy, and only the fourth in the history of the Globes. The other three were Machiko Kyo in 1957 for “The Teahouse of the August Moon,” Miyoshi Umeki in 1961 for “Flower Drum Song” — the only performance by an Asian woman to win an Oscar — and Yvonne Elliman in 1974 for “Jesus Christ Superstar.”

Also Read: 'Crazy Rich Asians' Nears $150 Million, and It's Not Just Because of Asian Moviegoers

Wu says she’s proud that “Crazy Rich Asians” is showing that there is a demand for Asian representation among moviegoers. And while other Asian actresses might look for roles where their ethnicity isn’t at the forefront of their character, she is looking for leading roles that are specifically informed by Asian-American culture, as in “Crazy Rich Asians.” Her words are similar to those of “This Is Us” star Sterling K. Brown, who, during his Golden Globe acceptance speech this year, said he was grateful to play a role specifically written for an African American.

“This might be a little controversial, but I want to do roles where the Asian part of my identity is essential to the role,” Wu says. “There are other Asian actresses who have said they believe they have achieved success when race is incidental to their character. But for me, there’s a difference between diversity and representation. Representing is about proudly putting forward the thing about you that makes you different, and it’s not just how you look.”

“I think that’s something I want Asian Americans to be proud of and to not see as incidental. I don’t think it should be the total of a character, but race does have an impact on who we are, and I want to be a part of stories that don’t neutralize that impact.”

“Crazy Rich Asians” is available on Blu-Ray and digital now. The 76th Annual Golden Globes will air on NBC on Jan. 6.