“Cops” has found a new home on Fox Nation, Fox News Media’s streamer. The 33rd season will begin airing on Oct. 1. In a Monday announcement, Fox News Media revealed the premiere will include the first four episodes, new episodes will air every Friday thereafter and 15 episodes from Season 32 are included in the deal.

The show was canceled by Paramount Networks last year in the wake of the police murder of George Floyd and the associated protests and national reckoning over police brutality and systemic racism. It quietly began filming again last fall, though episodes filmed at that time were not expected to air in the United States and were, instead, filmed to meet contractual obligations. 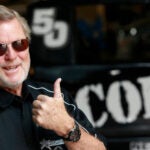 Fox Nation president Jason Klarman said Monday, “’Cops’ is one of the most iconic brands on television with an incredibly passionate fan base. We wanted to show our appreciation to all first responders by combining the launch with a free one-year subscription to give back in a small way to those who place their lives on the line every day to keep us safe.”

In addition to the Oct. 1 premiere of “Cops,” Fox Nation is also rolling out other “first responder-themed programming” starting Sept. 13. Those programs include “911: On Scene,” “When Seconds Count,” “Protect and Serve” and “Answer the Call.”

All first responders — including police officers, firefighters, emergency medical technicians and paramedics — will be offered a one-year free subscription to the streaming service on Sept. 13, as well. Fox Nation will donate $5 to Answer the Call, a nonprofit that provides support to families of New York City first responders killed in the line of duty, on behalf of each new subscriber, with a cap of $50,000, through that week.