“In the Heights” star Corey Hawkins is reuniting with Warner Bros. for another movie musical, this time for the musical adaptation of “The Color Purple.”

“Black Is King” filmmaker Blitz Bazawle is directing at the studio. Hawkins is expected to play the role of Harpo in the film adaptation.

“The Color Purple” originated as Alice Walker’s Pulitzer Prize winning novel from 1982, which was later adapted into Steven Spielberg’s Best Picture-nominated film from 1985 and then again into a musical on Broadway from 2005. Spielberg’s film was the feature-debut for Whoopi Goldberg and also featured Oprah Winfrey in a breakout role. The musical from 2005 likewise earned 11 Tony nominations and was revived again in 2016, which netted two Tonys and grossed $350 million.

The story centers on a black woman named Celie, who grows up in intense poverty in the American South and endures harsh treatment from her stepfather, husband and others in her life, which tests her faith in God and humankind.

Marcus Gardley wrote the screenplay based on the musical, which has a book by Marsha Norman and music by Brenda Russell, Allee Willis and Stephen Bray. The musical was a hit for its joyous score featuring jazz, ragtime, gospel, blues and African rhythms.

Corey Hawkins most recently starred as Benny in the film adaptation of “In the Heights” based on Lin Manuel Miranda’s play and from director Jon M. Chu, and he’ll next be seen in “The Tragedy of Macbeth” from director Joel Coen. Some of his other notable film credits include “Straight Outta Compton,” “Kong: Skull Island,” “BlacKkKlansman,” “6 Underground” and the series “24: Legacy.” He’s also a Tony nominee for his work in the 2017 production “Six Degrees of Separation.” 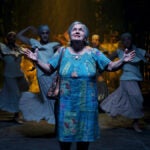 Also Read:
‘In the Heights’ Star Olga Merediz on How Abuela Claudia Has ‘Grown’ Since Broadway Debut