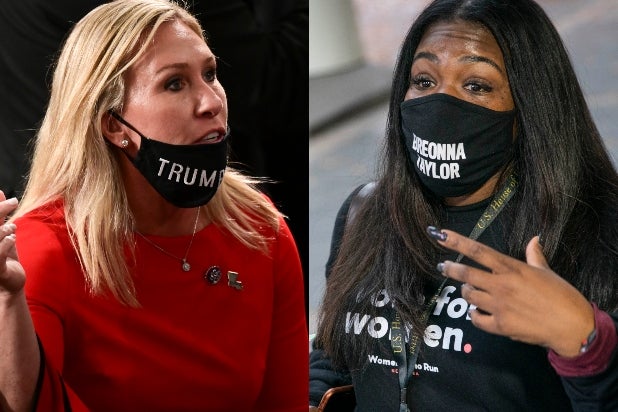 Democratic Rep. Cori Bush announced Friday she is moving her office away from that of GOP Rep. Marjorie Taylor Greene, a fellow freshman congresswoman who, she said, “lashed out” at her earlier this month.

In a statement posted to Twitter, Bush said that as she and her staffers were going to vote for the second impeachment of then-President Donald Trump, Greene appeared nearby, “ranting loudly into her phone while not wearing a mask.”

Trump’s second impeachment followed a deadly riot at the Capitol a week prior. During that riot, congressional representatives and their staffers were locked down. According to reports, the event was a superspreader — per CNN, 38 Capitol officers got COVID-19. So, too, did at least three Congressional representatives, which Bush knew, so she asked Greene to put on a mask, according to her statement.

“Out of concern for the health of my staff, other members of Congress and their congressional staff, I repeatedly called out to her to put on a mask,” Bush recounted, adding that Greene and her staff berated her and one staffer yelled, “Stop inciting violence with Black Lives Matter.”

Greene responded on Friday by posting a video that does show a confrontation, but does not include a staffer referencing Black Lives Matter. In a tweet, however, Greene called Black Lives Matter a “terrorist mob” and claimed that Bush leads the group in her hometown area of St. Louis.

Citing another instance in which Greene “lashed out” at her on Twitter — plus this week’s new reporting that Greene showed support on social media for calls to kill Democratic lawmakers like House Speaker Nancy Pelosi — Bush said she will be moving her office away from Greene’s.

“In the context of Taylor Greene’s repeated endorsements of executing Democratic politicians before taking office, Taylor Greene’s renewed, repeated antagonization of the movement for Black lives in the last month directed toward me personally is cause for serious concern,” she wrote.

In the past, Bush has spoken about her rocky start with Republican members of the incoming class of representatives. Several of them, she has said, addressed her as Breonna Taylor during orientation. At the time, Bush was wearing a mask bearing the name of the young Black woman who was killed by cops as she slept in her home last year.