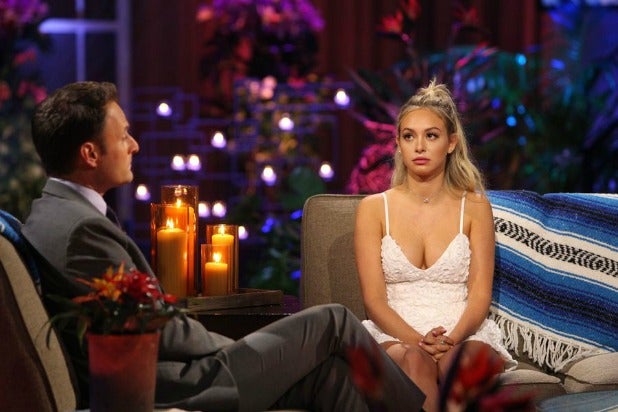 Chris Harrison and Corinne Olympios on "Bachelor in Paradise"

Corinne Olympios returned to ABC’s “Bachelor in Paradise” on Tuesday to offer her side of the story.

The “Bachelor” Season 21 standout discussed the sexual encounter between herself and fellow “Paradise” contestant DeMario Jackson that led Warner Bros. to briefly shut down production on Season 4. Jackson, who was cleared of any wrongdoing by the studio, discussed his take on things during last week’s episode.

Despite the reality TV star having issued a statement earlier this summer referring to herself as a “victim,” she told Harrison that she now doesn’t think Jackson was at fault.

“I honestly don’t feel like he did anything wrong, especially because everybody thought I was having fun and being Corinne,” she said. “I don’t think it’s anyone’s fault. It’s just an unfortunate, annoying situation that had to go down. It really sucks.”

She pointed out that she didn’t appreciate that Jackson was quick to talk to the media after filming halted.

“Before I even had a chance to gather my thoughts, collect myself … he just went for it and was so on the defense.” She adds about Jackson, “I never was mad at you or blaming you for anything.”

Olympios said she is now “doing a lot better,” and she wants “people to know that I don’t blame DeMario.” She added that she harbors no ill will toward him.

“I hope he’s doing well — I wish him the absolute best,” she said. “It was really an unfortunate situation.”

“Bachelor in Paradise” airs Mondays and Tuesdays at 8 p.m. ET on ABC.