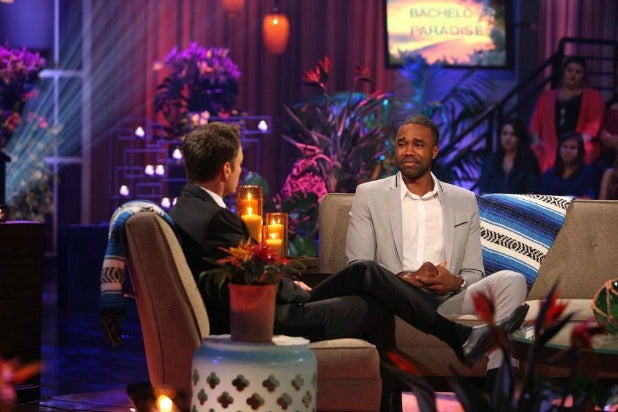 Chris Harrison and DeMario Jackson on "Bachelor in Paradise"

DeMario Jackson returned to “Bachelor in Paradise” on Tuesday to share his side of the story.

Following his sexual encounter with Corinne Olympios that led the ABC dating show to a temporary pause in filming, Jackson was back on “Paradise” to emotionally tell host Chris Harrison how he felt about the fallout.

Jackson said that after he hooked up with Olympios on the first day of filming, he thought things were fine between them. “I never once thought that I would be here,” Jackson said.

He explained that he was very emotional when he learned that the production shutdown was making headlines.

“I cried in my hotel room,” Jackson admitted. “I was sad.”

He added that he was “confused” by the allegations against him: “I was extremely emotional, as well. … I’m just [like], I can’t catch a break.”

“At the same time, it was kind of time for me to look at the man in the mirror and be, like, ‘Damn, maybe I need to get my s–t together more,'” he continued.

Jackson said he “felt bad for [Olympios] because she was being slut-shamed.” He added, “I’m not going to let this get me down.”

He previously told TheWrap that the situation felt like an example of “white privilege” to him.

“Bachelor in Paradise” airs on Mondays and Tuesdays at 8 p.m. ET on ABC.