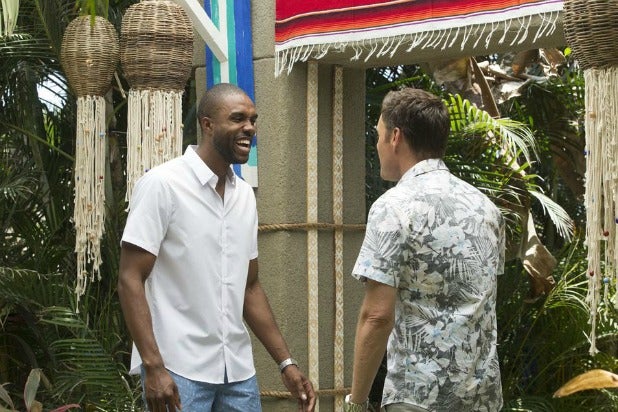 DeMario Jackson and Chris Harrison on "Bachelor in Paradise"

DeMario Jackson still has a lot of questions about the situation that led to him and Corinne Olympios exiting Season 4 of “Bachelor in Paradise.”

The ABC dating series’ season is currently airing after production was halted briefly over allegations of misconduct surrounding a sexual encounter between Jackson and Olympios, neither of whom returned to the show. Jackson appears in Tuesday’s episode to share his side of the story, while Olympios offers her own remarks on the August 29 episode.

Jackson, who was cleared of any wrongdoing by Warner Bros., told TheWrap that he doesn’t understand why it was seemingly acceptable for Olympios to have had an apparent boyfriend during her stint on the ABC dating show, considering he was sent home from “The Bachelorette” after being confronted by a supposed significant other.

Also Read: Why the Next 'Bachelor' Star Definitely Won't Be Peter Kraus

“I got kicked off a show for having a girlfriend, you know?” Jackson said. “I don’t really want to bad-talk [Olympios], and not to bring up race, but that’s the definition of white privilege.”

He also pointed out that he’s “pissed” that “Bachelorette” producers included the so-called girlfriend’s confrontation on the show, as he feels it led some viewers to think that he’s not a good guy.

“I’ve had people literally say, ‘Well, he cheated on his girlfriend — he can rape Corinne,'” Jackson said. “That’s the kind of people who watch this show. You’re like, ‘Wait, what? That doesn’t even make sense.’ Some people really think like that.”

Jackson also discussed whether he has regrets about how far things went between himself and Olympios, his suicidal thoughts and whether he would ever go on the “Bachelor” franchise again.

TheWrap: Did you know the two “Bachelor in Paradise” producers who initially filed the misconduct allegation?

DeMario Jackson: Yeah! That’s the thing — both parties I know, I worked with them on “The Bachelorette.” They were homies — they hung out with all the guys. I was so confused, like, “Wait a minute — it was them two?” It was a really weird thing. The producers who filed the complaint, they were on set with us during The Bachelorette when it was a house full of guys. And [the two female producers] were one of the guys — we would hang out, have fun. I didn’t get the reasoning.

They’re no longer with the show?

DJ: They both quit without even talking to a boss, a manager, without even alerting anybody. They just up and quit the next day. They weren’t present when [the incident] happened, and they didn’t get to set until later on that night, and they overheard that Corinne and I had hooked up, and then from there, they formed an opinion, and then the next day, they quit. I always tell people, “I’m still just as confused as you guys.”

Have you spoken to those two producers since this all happened?

DJ: No. When you first get to the island, they’ll come to your room , everybody says hi. The funny thing is, one of them, we all hung out in my room. It was two or three other producers, they were welcoming me back like homies. [So when this happened,] I’m like, “You were just in my room two nights ago!” They knew who I am, they know my character, they know me.

Do you regret what happened between yourself and Corinne? Do you now think that you two took things too far?

We didn’t do anything that had never been done before on “Paradise” — nothing. People have hooked up and had sex on “Paradise” — like every single season, they’ve showed it. Even on “The Bachelorette,” they show the fantasy suite. It wasn’t like we did something out of the ordinary. The main reason for “Paradise” is to go on there, to drink, party, have fun and hook up. No, I have no regrets with what we did because we didn’t do anything wrong. If production would have thought it was something bad, they would have stopped us then. By the time this all had transpired, and we were both kicked off the show, Night 1 had already been shot, filmed and edited. If these executive producers with 15-plus years of experience all looked this over and thought it was cool, how does some first-year, A-level producer think that it’s bad?

Do you think the show should have handled things differently regarding word getting out about the production shutdown?

DJ: One hundred percent. I feel like before both of our names were released, they should have gotten the facts for it. We were both on the chopping block for no reason. At the end of the day, we don’t know the Stanford rape victim’s name, and do you know why we don’t know her name? Because she didn’t want anyone to know it. So she can have a normal life, so she can walk around without people looking at her and going, “Hey, look, that’s the girl who got raped.” And that’s why journalism, in my opinion, is dead. Nowadays, anybody with a blog site, anybody with a fake URL and anybody who says “source” or “alleged,” they can post anything they want. It sucks because it really ruins people’s lives.

Do you think that you being confronted by a supposed girlfriend during “The Bachelorette” put in viewer’s minds that you’re not a good guy?

DJ: Exactly. That’s one thing I’ve honestly said I’m pissed about, and I’ve talked to producers — that actually did piss me off. I’m like, “Look, man, you guys make us do all this background and all this crazy s–, and you let a random girl call in with no proof of nothing.” She said yeah, she’s my girlfriend, we’ve been dating for six months. I was like, “Tell her to show any type of proof, any picture, a text message.” It sucked because even [producers] said, “Look, it was too good to pass up.” I’m like, “Damn, that kind of sucks.”

How did you feel about your co-stars saying on last week’s episode that race was a factor in this situation?

DJ: If I’m white, we’re not having this conversation. [I’d have stayed] in “Paradise,” and I’d probably be engaged to Alexis [Waters]. Race, that’s a big, big topic, and that’s [magazine] sales, that’s [website] clicks, that’s all that other stuff.

What’s your take on Corinne apparently having a boyfriend while she was on “Paradise”?

DJ: I get kicked off a show, and everybody hates me, I’m the villain, I’m this crazy black guy with all this. And she has a boyfriend, and everything’s fine. It’s like, “How the hell is that possible?” I’ve been taught since Day 1, “You’re going to be treated differently.” You’re programmed as an African-American that that’s going to be your life.

It’s a very weird time to be living in 2017, [with] our current president, and to be in the middle of a sexual-slash-race-slash-whatever scandal because I’ve gotten it from all sides. I’ve gotten white people that were like, “Hey, I’m all about the interracial dating, keep doing your thing.” And then I get black people who hate it, and white people who hate it. So I’m right in the middle of this crazy, crazy tornado, and I’m just kind of sitting here like wow — wow, wow, wow.

You’ve mentioned that suicide crossed your mind. Did you tell anyone about this at the time? How dark did things get for you?

DJ: It wasn’t like, “I want to jump off a bridge right now.” But for me, it was the thought that crossed my mind like, “I don’t want to live anymore.” Because I didn’t know how to overcome. I didn’t know even where to begin. I went from a regular guy on that Sunday, at the gym, having fun. Monday, I’m all over everywhere. And for three straight weeks, close to a month, I was on every news station, every minute, every hour, every second. At one point, I was just sitting in the middle of this room, and it was on fire, and I’m just there like, “What the f— do I do?” Especially because when you know you’re 100 percent innocent, and you know there’s a tape, but you know that it won’t come out for whatever reason. I’m just sitting here on fire and burning and burning.

Slowly but surely, the narrative started to change, and people started to use common sense. Slowly but surely, my hate mail started to be like, “Hey, sorry for judging you. So, this doesn’t make sense.” You still have those doubters, even when WB released their statement [that they found no wrongdoing]. Now [the past week has] just been overwhelming with so much love and support and all that kind of good stuff, but it sucks that from the very beginning, no one believed me. It’s like, “Oh, the woman’s right.”

Can you have a normal life? Do you think you will be able to go on dates without people thinking they already know who you are?

To be honest, that’s the hardest thing for me right now. I don’t know if people think if you’re on TV, you have money. Or they’re just trying to plot, get ahead, they want Instagram followers. It sucks to be jaded — I’m the most happy-go-lucky, the happiest person in the world, always smiling. Now I have that [thought of], “F–, I don’t know.” I really don’t know. I would hate to bring all this DeMario baggage to a girl, a new relationship, just for the fact that it’s not right. It’s bad enough that my family gets stalked and harassed.

Would you do a reality show? Do you plan to write a book?

DJ: I would love to dabble in stuff. It can help both men and women. The men who have falsely accused — where do we go? This is a very s–ty feeling. Hopefully, the way I’ve reacted, and the way I’ve handled the situation, hopefully that helps a guy in the near future be able to overcome.

Would you go back on the “Bachelor” franchise?

DJ: No doubt. In a very weird way, I’ve had friends reach out and be like, “Yo, I think they’re prepping you for ‘The Bachelor.'” And that’s great, it sounds good. But my main thing is getting back to being me, smiling, having fun. Before I focus on “The Bachelor” or a woman, I just want to get back to doing everything that I can do.