Vicky Krieps, the actress from Luxembourg who introduced herself to a new audience by playing a headstrong woman in Paul Thomas Anderson’s “Phantom Thread,” has come to TIFF 2022 with “Corsage,” a drama about a woman Krieps has felt a connection to since she was 15: Austrian Empress Elisabeth.

Krieps and director Maria Kreutzer stopped by TheWrap and Shutterstock’s Interview and Portrait Studio at the Toronto Film Festival to talk about “Corsage,” which follows the Empress (Krieps) on her 40th birthday, an age that, according to 19th century Bavarian society, made her an old woman. Feeling increasingly isolated by both royal circles and her own husband, Emperor Franz Joseph (Florian Teichtmeister), Elisabeth finds herself imprisoned by her own elite status and starts looking for any way to rebel against it, no matter how small.

Krieps said that growing up, she felt free to do whatever she wished and admired her mother for raising her to value that independence. But when reading a biography of Empress Elisabeth — or Sissi, as she is affectionately known in Austria — as a teenager, she empathized with her in a way she couldn’t understand at the time. 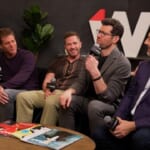 Also Read:
Billy Eichner on the Thrill of Making ‘Bros’ With ‘So Many Hilarious, Profoundly Talented, Openly LGBTQ+ Performers’ (Video)

Looking back, she says Elisabeth’s life made her think about how the stifling expectations that society placed on women over a century ago are still present even today.

“I felt related to her sadness, even though I was free,” Krieps told TheWrap’s Editor in Chief, Sharon Waxman. “Even if you grow up free…society still puts you in this corset: having to be nice, having to be pretty, having to be intelligent but not too intelligent. It’s a stress that even I, a woman who had all the freedom I wanted, was relating to this princess who was imprisoned in the image of being a woman.”

Krieps was also inspired by another famous actress known for playing Sissi: Romy Schneider, the Austrian, César-winning star who played the empress in a trilogy of films in the mid-1950s. Though the role made her famous, Krieps believes that it unfairly typecast her as the beautiful young woman.

“She was also imprisoned in the role of the princess,” Krieps said. “It’s really terrible how these women were imprisoned in their own beauty and looks. So for me, I wanted to make a playground for [Sissi and Schneider] to play and misbehave. That’s why I misbehave in the movie.” 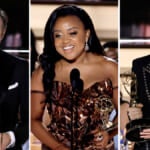 Also Read:
Emmy Analysis: Voters Spread the Love for a Change, and Good for Them

All of these ideas fed into Krieps’ vision for the movie, which she shared with Kreutzer, who’d already directed the actress in the 2016 film, “We Used to Be Cool.” Kreutzer told TheWrap that she tends to avoid period pieces and biopics, but she thought Krieps’ take on Sissi went beyond what most of those two genres tend to offer.

“I sensed that this was really a story about rebellion against a man’s world and what it expects us to represent and to be as women at all times,” Kreutzer said.

Watch the full interview in the clip above.