After the film’s weekend premiere, all four sat down with senior film reporter Brian Welk at at TheWrap and Shutterstock’s Interview and Portrait Studio at the Toronto Film Festival to discuss just how they were all going to pull this off and hopefully create a romantic comedy for the ages.

“I was just acting in things Nick was directing. I’d never written a movie,” Eichner said. “He said we wanted his next movie to be a rom-com, because he loves rom-coms, and he thought it would be cool if his next one was about a gay couple. And he said, ‘Do you want to write it with me and if all goes well, star in it, I’ll direct it, hopefully Judd will produce it?’ … We thought that idea of a confident, self-reliant, bold, proudly gay man —” 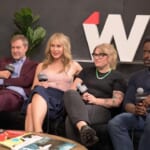 “Who has his shit together!” Stoller cut in.

“Who’s not a mess,” Eichner continued. “What happens if that person falls in love with someone who also prides themself on not being emotionally available?”

In the R-rated comedy, already being cited for its realistic depictions of gay men having sex, Eichner plays Bobby, a brash, blunt podcaster who spearheads an LGBTQ+ museum and falls for Macfarlane’s Garth Brooks-loving estate lawyer Aaron, who is quite a different representative of the community they both inhabit.

“It’s interesting to see, as an actor, how many flaws I can have [with a character] and still get away with making the love story happen,” Macfarlane said, adding that he sometimes pushed back on his character’s rougher edges, thinking they might be too off-putting. “I saw the movie yesterday and I thought, ‘Aaron, you are such a dick!'” 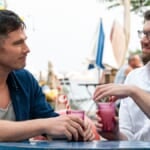 Eichner agreed, noting that Bobby and Aaron are “both dicks at various points, but that’s how people are.”

Stoller assured Macfarlane he was in good stead: “I remember telling you, the more flawed and real you are, the more the audience is going to root for you for figure out your shit.”

Apatow, a veteran of film exploring minefield relationships and stubborn male growth (“Knocked Up,” “This is 40”), commented on the historic nature of “Bros.”

“It’s a very special experience, but it starts out with Nick and Billy having this really great idea,” Apatow said. “And then later in the process it starts hitting you what it means to people and what the value is beyond making a really entertaining, funny movie.”

Eichner added that nearly all of the film’s cast is LGBTQ+, another rarity in a studio comedy. “We’ve all had challenges and are bonded by that. And they’re hilarious… What we discovered is that there are so many hilarious, profoundly talented, openly LGBTQ+ performers out there who’ve never been given an opportunity to shine in a movie of this scale.”

For the full conversation about “Bros,” click on the video above. The film will open nationwide on Sept. 30. 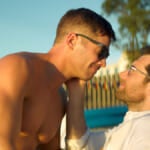