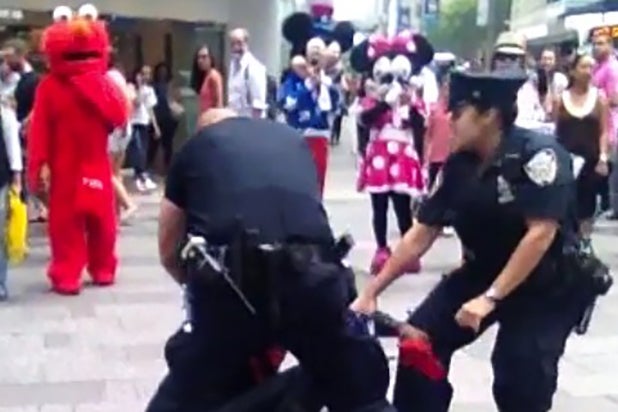 This probably isn’t the starring role he was hoping to land.

A costumed Spider-Man is caught in a web of trouble, following a confrontation with police officers Saturday in New York City.

Junior Bishop, 25, can be seen in cell phone video fighting with officers in Times Square. The incident happened around 2 p.m. at the corner of West 42nd Street and Broadway in Times Square, the New York Police Department tells TheWrap.

The trouble started after Bishop, dressed as the iconic webslinger, demanded $10 from tourists to pose for pictures with them, ­according to police.

A female tourist tried to give Bishop $1 for a picture, but he refused, authorities said, claiming he only took $5, $10 or $20 bills.

When officers approached the Brooklyn resident, a fight broke out.

Several people recorded the incident on their cell phones and a two-minute tape, obtained by the New York Post, was uploaded to YouTube.

Bishop can be seen on the tape fighting with a male and female officer. At one point, he punches the male officer, who then throws him to the ground, and yells “turn the fuck around.”

The officer flips Bishop over and places a knee on his back. Several more officers scramble to the scene to help handcuff Bishop, and one officer can be heard yelling, “That’s fucking assault.”

As officers try to gain control of the situation, a woman yells, “Hey Stop.” Then another woman says, “I’m recording it … that’s harassment.”

No one was seriously injured in the incident, police said.

Warning, the video below of the incident contains profanity.