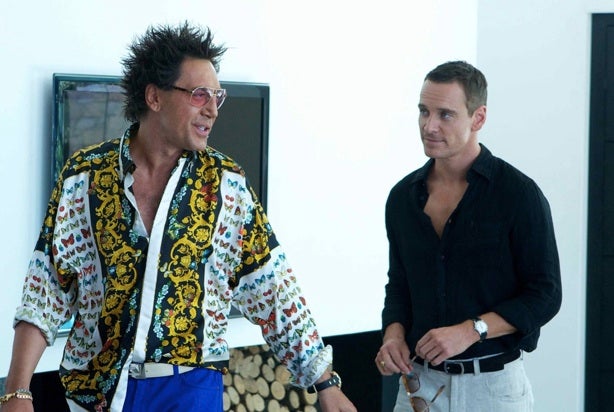 Ridley Scott may not like the verdict for his thriller, “The Counselor.”

The initial reviews for the star-studded new film, which stars Michael Fassbender, Brad Pitt, Javier Bardem, Penelope Cruz and Cameron Diaz have been mixed at best, with critics griping that the movie is a B-List affair despite the A-List talent involved. For additional pedigree, “No Country for Old Men” writer Cormac McCarthy is responsible for the script.

“The Counselor” focuses on a morally compromised lawyer who sinks into the dark world of drug trafficking. So far it has eked out a 50 percent “rotten” rating on Rotten Tomatoes, with the caveat that the score could rise or fall as more reviewers weigh in on its merits.

One critic who fell firmly on the rotten end of the assessment pyramid was TheWrap’s Diane Garrett, who noted that the movie lacked the flair of Bardem’s Brian Grazer-inspired hair. It starts promisingly, she argued, before going off the rails.

When it comes to “The Counselor,” she wrote. “Ultimately, it’s hard to care about the man or the movie.”

That was kid gloves compared to David Thomson’s annihilation of the film in the New Republic. He found almost nothing to like in the proceedings — not the direction, nor the script, nor Fassbender’s work as the compromised attorney — save for some photographic big cats.

“‘The Counselor’ is a very bad film, and I suspect that a lot of the actors knew that already as they did their work,” Thomson wrote. “It lacks clarity, plausibility, suspense and purpose. But it has two lovely cheetahs.”

In Time, Mary Pols called the film a portentous mess that reads like a parody of its Pulitzer Prize-winning screenwriter’s tersely worded stories of men of loose morals in peril.

“The baffling thing is, McCarthy did write ‘The Counselor,'” Pols wrote. “It’s his first original screenplay. ‘The Counselor’ is not faux McCarthy; it’s just bad McCarthy.”

Also read: 6 Reasons Actresses Over 40 Are Hotter Than Ever in Hollywood

For Kate Erbland of Film.com the movie is all cool and no heat. It lacks the underlying emotional undercurrents necessary to make the film’s scenes of bloodletting shock or to keep audiences engaged in the plot’s twists and turns.

“The entire thing may speak of the meaningless violence of life (or at least lives dedicated to evil in its many forms), but that doesn’t mean that the film itself must feel so terribly meaningless on its own,” Erbland wrote.

It’s a fashionista’s dream thriller, and that’s not a good thing, J.R. Jones of the Chicago Reader groused.

“The characters dispense studiously grim and cynical dialogue, and because it was directed by Ridley Scott, their inner lives matter less than their jewels, designer clothing and fashionably spare living spaces,” Jones wrote.

The film did have its supporters. Moira MacDonald acknowledged in the Seattle Times that the plot had its clunky moments, but said Scott’s innate sense of imagery rescues the proceedings.

“What remain are some wonderfully vivid moments: Diaz, entering a Catholic church, dipping her fingers into the holy-water font and smelling them, as if it might be perfume; Cruz, in a red dress that’s one of the film’s few colors; a sickeningly creative method of beheading; a troubled Fassbender’s answer to a waitress’ query of what he wants to drink (‘Hemlock.’); a pair of elegantly collared cheetahs, with easily enough presence to headline their own movie,” MacDonald wrote.

“You wait for ‘The Counselor’ to get started and finally realize it never will — but you can, at least, enjoy the pictures.”