Faizon Love has filed a lawsuit against Universal Pictures after he says the studio failed to deliver on certain promises that were made to him in exchange for not suing the company back in 2009 over the poster for the movie “Couples Retreat.”

The international poster for the film caused an uproar at the time because Love and co-star Kali Hawk (the only non-white couple in the film) were left off. Faizon says the studio promised to remove the poster from circulation but he has recently discovered “several mediums continue to use the offending image to promote the film today.”

More importantly, Love says that at the time, Adam Fogelson — who was chairman of the studio then — told Love that Universal “would find new opportunities for him (on par with or better than blockbusters like ‘Couples Retreat’) to make up for” what happened. Love also says that the film’s producer, Scott Stuber, made a similar promise “if Mr. Love did not publicly or legally pursue the issue of his removal from the one sheet for the movie.”

Love says by not delivering on those promises, he has been “deprived” of at least $30 million in potential income.

Fogelson and Stuber (who is now the head of original films at Netflix) are not named defendants in the lawsuit. Universal declined to comment.

In expressing his anger about the poster itself, Love says in the lawsuit, “Rather than enjoy maximum visibility with the film’s release, Mr. Love was demoted to the proverbial ‘Invisible Man,’ as penned by Ralph Ellison. Although ‘Couples Retreat’ achieved a first-place box office opening weekend ranking, and went on a spectacular run that grossed more than $171 million worldwide, Universal Studios placed Mr. Love in the back seat of the ride enjoyed by his six White costars. Mr. Love and his Black costar, Kali Hawk, were expunged completely from the film’s principal international advertisement, while the other ‘couples’ basked in the publicity and acclaim of an international box office hit.” 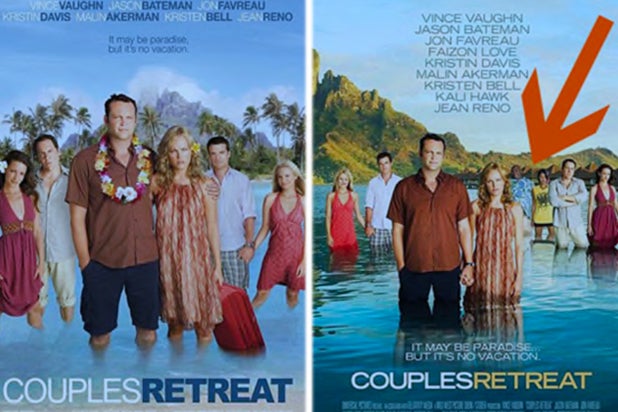 Love’s attorney, Eric George, said in a statement, “As far as Universal was concerned, its contract meant nothing, its promises to correct its egregious behavior meant nothing, and its pledges to Faizon Love meant nothing. Yet this is not merely a breach of contract and good faith: It is nothing less than a deliberate act of racism on the part of Universal Studios at the highest levels.”