Less than a week after Universal fired co-chairs Marc Shmuger and David Linde, a comedy made on their watch, "Couples Retreat," significantly outperformed expectations and easily won the box office with an estimated $35.3 million.

Meanwhile, Paramount’s "Paranormal Activity" proved all the "Blair Witch" hype surrounding it was worthwhile, taking in $7.1 million and setting what the studio claims is a revenue record for a film running in fewer than 200 theaters.

"Couples Retreat" was the only widely released new entry for the weekend. 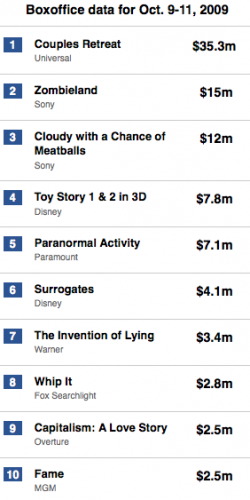 The ensemble-cast movie, written by and starring Vince Vaughn and Jon Favreau, and also featuring Jason Bateman, Kristen Davis and Kristen Bell, was budgeted at $60 million, with minority financing kicked in by Relativity Media. The PG-13-rated film was widely tracked to do about $28 million worth of business over the weekend.

"The film performed way beyond anybody’s expectations," conceded Universal distribution president Nikki Rocco. "Audiences were certainly in the mood to laugh. And Vince and Jon together just delivered the goods to bring audiences in. And Marc and David greenlit this movie — it was made under their watch — and they get credit for it."

Of course, in timing Shmuger and Linde’s replacement by Adam Fogelson and Donna Langley, Universal president and chief operating officer Ron Meyer probably wasn’t unaware that over-performance by "Couples Retreat" was a was a distinct possibility … and that waiting another week might have made things a little awkward.

The film — despite poor reviews and a "B" Cinemascore mark — faced little if any competition. Sony’s "Zombieland," last weekend’s box-office champ, was originally scheduled for an Oct. 9 opening but ended up getting pushed up a week.

Notably, Universal also used a weekend featuring exceptionally light competition to come up with its last big opening. In April, "Fast and Furious" premiered to $71 million, with Miramax’s "Adventureland" supplying the only newly released opposition.

For its part, the R-rated comedy-horror-themed "Zombieland" declined as projected, 39 percent, coming in second with $15 million and putting the Woody Harrelson-starrer at $48 million domestically after two weeks, according to studio figures. The movie costs Sony and partner Relativity only $23.6 to produce.

In third place, Sony’s 3D-animated "Cloudy with a Chance of Meatballs" continued to hold strong in its fourth week, taking in another $12 million to bring its domestic total to $95.7 million. That movie costs Sony’s animation unit $100 million to make, but it’s expected to ultimately yield as much or more than that amount in international release.

Disney paid north of $40 million to convert the two animated features to 3D and market them for rerelease. However, with a third "Toy Story" installment slated for next year, the studio is probably happy with the brand-freshening it’s received so far.

Right behind in fifth place was the weekend’s big box-office Cinderella story, R-rated horror movie "Paranormal Activity." According to Paramount, with the $11,000 film averaging about $44,000 for each of its 160 screens this weekend, it set a modern performance record for a picture released in fewer than 200 venues.

A Paramount release lists Warner’s "Gran Torino," which averaged about $35,000 on 84 screens earlier this year, as the only film to come close to that benchmark.

While the weekend was low on widely released studio pictures, a number of indies and specialty-division titles opened.

Sony Classics, for example, debuted "An Education," a 1961-in-London-set coming-of-age romance drama featuring Carey Mulligan doing the coming of age and Peter Sarsgaard as the playboy who’s around to capitalize on that. Directed by Dutch filmmaker Lone Scherfig, the film is receiving lavish praise from critics, including the Wall Street Journal’s Joe Morgenstern.

Here are the weekend box-office’s top 10 films, according to Hollywood.com

Cloudy with a Chance of Meatballs ($12 mil)