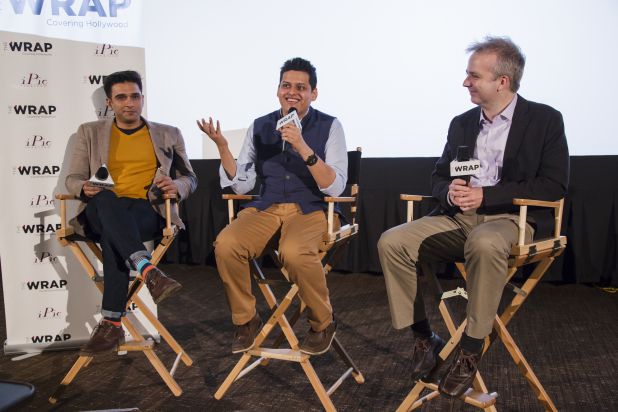 Writer-director Chaitanya Tamhane‘s “Court” won best film and the Lion of the Future Award for best debut in the Horizons competition at Venice, but it made enemies in the sluggish Indian court system — where 2.6 million of whose the nation’s 4 million prisoners now sit in jail awaiting trial, often for years.

“A lot of lawyers were offended,” Tamhane told moderator Thom Geier at TheWrap’s Screening Series at the iPic Theater in L.A. on Wednesday. “But also it won the national [Indian] film award, the highest honor, which is quite funny considering that the film is quite anti-establishment.” The film is India’s official submission for the foreign-language film Oscar.

“We’re still wondering if they’ve seen it,” joked producer Vivek Gomber, who co-stars in the film and financed most of the budget, reportedly under $600,000.

Shot in a series shots up to six minutes long, which often required as many as 40 takes, “Court” dramatizes the Kafkaesque world of Indian jurisprudence — and reminds us why Kafka used to read his books aloud while laughing himself to tears. “I was watching an American courtroom drama,” Tamhane said, “and I started wondering would it would be like to be in an actual courtroom.”

Inspired also by Krzysztof Kieślowski’s film “The Office,” Tamhane visited a lower court in Mumbai to see India’s legal officials at work. “I was really fascinated by what I saw,” said Tamhane, “because there was an air of mismanagement and chaos. The lawyers were not always prepared. Yet life and death decisions were being made in that room, and there were smaller stories unfolding in the corners of the room. So I saw some scope for humor and satire.”

The plot is fictitious — a dalit (Untouchable) protest singer is put through a protracted trial on evidence clearly trumped up by racist, corrupt authorities. But the background is all too real, inspired by several appalling cases. “One was a folk singer named Jiten Marandi, a cultural activist, a protest singer,” said Tamhane. “There was a bomb blast, and one of the suspects was named Jiten Marandi as well.” A newspaper falsely accused the singer of being the bomber, then apologized with a correction.

That did not stop the legal system from grinding on. “They sentenced him to death,” said Tamhane, “so it stopped being funny after a time.” The film combines a variation of this story with an expose of dalit sewer workers poisoned on the job.

The protest singer’s bitterly jesting lyrics about suicide inspire the cops to charge him with inciting a sewer worker’s suicide. As Gomber’s patient defense attorney repeatedly demonstrates, the worker died drunk and oxygen-deprived, and nobody but the state’s favorite courtroom perjurer thinks he had suicidal tendencies.

This might have been played angrily, like the Wall Street expose “Inside Job,” or for bitter laughs, like the superb Oscar contender “The Big Short.” Instead, “Court” goes for penetrating social portraiture. One hilarious scene, in which the crusading defense attorney proves defenseless against his lovably needling parents, took 67 takes to get right.

In court, the people literally don’t speak the same language — as in real courts in India, the film uses four languages, English, Hindi, Gujarati and Marathi. Everyone seems trapped by ancient injustices, antiquated procedures, misunderstandings, and a tradition of dishonesty.

And when the ambitious, prejudiced prosecutor leaves the court, she takes her family to a Donald Trump-ish stage comedy in which Mumbai people take a stand against nasty North Indian immigrants. “That sentiment is pretty popular among middle-class Marathi people,” said Tamhane. While watching his film, he added, “They generally applaud with the audience [at the film’s immigrant-bashing stage show].”

“Court” has even made an impact on the real world of India’s courts. “A month ago, a judge cited the film, and asked police to watch this film to be more sensitized,” said Tamhane, “because I think they’d messed up the investigation of a so-called extremist, a Maoist who wasn’t — who was falsely implicated.”

Tamhane is pleased by the success of “Court,” but he’s aiming for bigger box office in his next collaboration with Gomber. “I would prefer millions of dollars,” said Tamhane. “The crazy part is, [Gomber] put up his own money for this film. We kind of got lucky with this one, but I don’t want him to go bankrupt.”