Courtney Love is definitely not onboard with “Pam & Tommy,” Hulu’s upcoming series telling the story of Love’s longtime friends Pamela Anderson and Tommy Lee. In fact, Love is putting Lily James — who will star as Anderson — on blast for being part of the project at all.

In a Facebook post on Sunday, Love voiced her disgust for the project, saying that it is capitalizing on a particularly traumatic event in Pamela Anderson’s life. According to her post, the project seemingly came to Love’s attention when she was asked to approve the use of a “Rolling Stone” cover she posed for.

“I find this so f—ing outrageous . When Pam / tommy sex tape was out / myself @pattyschemel @xmadmx were making a record. And the lone women in many recording studios in la,” Love wrote. “Where all / ALL! The staff engineers / producers / owners / were watching the sex tape with huge schadenfraude . . Guffaws , It was disgusting. I banned anyone discussing it. It destroyed my friend Pamelas life. Utterly.” 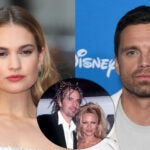 Love added that “Pam & Tommy” is “further causing [Anderson] complex trauma” before calling out series star Lily James directly. “And shame on Lily James whoever the f— she is,” Love wrote to bookend the post.

On May 7, Hulu released images giving fans a first look at James transformed into Anderson, alongside her costar Sebastian Stan as Tommy Lee, creating a storm on social media as fans marveled at how eerily similar the actors look to the real-life couple.

That said, the real Lee and Anderson are not involved with the project, and Courtney Love noted that she declined the use of her “Rolling Stone” cover.

Reps for Anderson, Lily James and Hulu did not immediately respond to TheWrap’s request to comment.