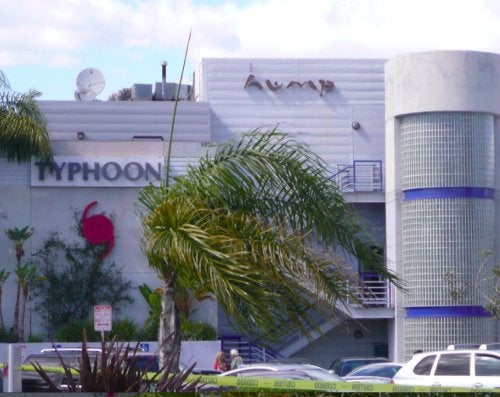 Reached in New York during the first screening of ‘The Cove’ for Japanese press, filmmaker Louis Psihoyos said ‘The Hump’ was not the only restaurant in Los Angeles that served whale meat.

"I know of two others that did it in the past two years," he said, referring to serving whale. "It’s in places that serve the highest-end sushi. If you speak Japanese and say the right thing they have a special place in the cooler."

Psihoyos is most concerned about the International Whaling Commission meeting recently and considering ending the moratorium on commercial whaling, in place since 1986.

If the moratorium goes, he said, "it’s open season on whales again. Now is not the time to reverse the huge environmental strides we’ve made."

Psihoyos has a new project, it seems, also using hidden cameras. It’s about maintaining the holocene – our geological basis – despite human destruction to the environment.

"I start working on it tomorrow," he said.

An Oscar for "The Cove" in hand, director Louis Psihoyos is obviously not done making mischief with secret cameras to save the whales and the dolphins.

Only this time it’s not in Japan – it’s in our backyard, in one of the town’s most exclusive sushi eateries.

Psihoyos conducted a straight-from-the-movies (his movie!) sting of a Santa Monica restaurant called “The Hump” (at left), where celebrities and VIPs have been known to fly in especially to have dinner in the upstairs space at the Santa Monica airport. The restaurant’s owner Brian Vidor is himself a scion of Hollywood. His father Charles Vidor directed such classic films as "Gilda," while Vidor has established a name in his own right for creating restaurants that boast, shall we say, challenging fare.

The sting was detailed in a New York Times piece Tuesday. Secret video in the restaurant and testing by specialists found that the restaurant was actually serving whale meat – which, of course, is outlawed. 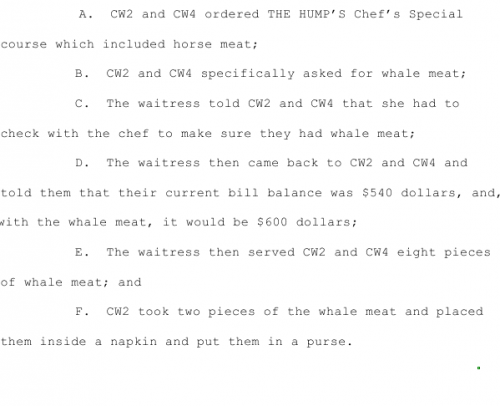 Charles Hambleton, a producer on “The Cove,” which reveals horrifying slaughter of dolphins in Japan and which won the best documentary Oscar on Sunday, got wind of the matter months ago, and planned the sting with two activists wearing hidden cameras.

“Video of their meal shows the two activists, both vegan, being served what the waitress can be heard calling “whale” — thick pink slices — that they take squeamish bites of before tossing into a Ziploc bag in a purse.”

Scott Baker, associate director of the Marine Mammal Institute at Oregon State University, tested the meat and found that the samples came from a Sei whale (right), which are found worldwide and are endangered but are sometimes hunted in the North Pacific under a controversial Japanese scientific program. “I’ve been doing this for years,” Baker told the Times. “I was pretty shocked.”

So am I, for God’s sake. I eat a ton of sushi and live in Santa Monica.

Now the feds are involved. TheWrap got a hold of the affidavit describing three separate occasions when investigators and secret witnesses got served whale meat. (see graphic; CW = confidential witness)

The feds searched the premises last Friday. The U.S. Attorney says charges may come as soon as this week. 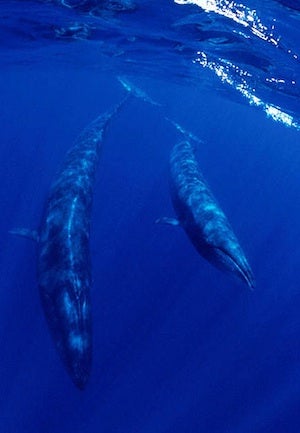 Meanwhile at The Hump today, the restaurant was pretty full at lunchtime.

"I haven’t heard about this (controversy). But the food is fabulous," said Doris Alexander, who said she’s been coming to the restaurant for two years. "I wouldn’t order it, but I haven’t had it before, so I wouldn’t know if I’ve eaten it."

As she was talking, another patron who was on his way in said,
apparently jokingly, "the whale here is fabulous." The customer, a man in his mid-30s, didn’t stop to elaborate.

"I hadn’t heard about the controversy,” said Julian Williamson, a student at USC. “It doesn’t really bother me. I grew up in Hong Kong. I understand the implications, but I’m still going to eat here."

Well guess what: I’m not.