An adaptation of the beloved anime series of the same name, “Cowboy Bebop” is described as “an action-packed space Western about three bounty hunters, aka “cowboys,” all trying to outrun the past.”

Cho stars in the series as Spike Spiegel, alongside Mustafa Shakir as Jet Black and Daniella Pineda as Faye Valentine. Per Netflix, the trio forms “a scrappy, snarky crew ready to hunt down the solar system’s most dangerous criminals — for the right price.”

The series will premiere on the streaming service on Nov. 19. Check out the first-look images below. 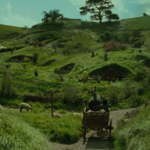 The original “Cowboy Bebop” was created by director Shinichirō Watanabe and animator Toshihiro Kawamoto, “Cowboy Bebop” ran for 26 episodes from 1997-1998 and was followed by a feature film, “Cowboy Bebop: The Movie,” in 2001.

Netflix’s adaptation has been in the works since 2018, having been forced to delay production for by several months after Cho suffered a knee injury requiring surgery.