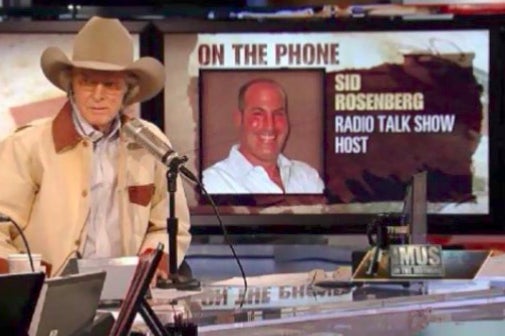 Craig Carton has received a mixed reaction from fellow media members after being arrested Wednesday for allegedly running a fake-ticket Ponzi scheme.

Following the arrest, Carton was dragged across the Twitter coals by NBC Sports’ head baseball writer Craig Calcaterra, who is not a fan. The next morning, Carton’s on-air partner Boomer Esiason shared a nice story with WFAN listeners about a supportive conversation he had in the hallway with Mike Francesa, one of most powerful and successful people in the history of sportstalk radio. Francesa and Carton aren’t exactly buddies either — you may be noticing a pattern here.

Elsewhere, Don Imus weighed in. Guess which side that notorious grump took?

They all enjoyed a good laugh over that. Imus, who actually used to occupy “Boomer & Carton’s” AM 660 time slot before he was fired for calling the Rutgers women’s basketball team “nappy-headed hoes,” then seemed to get a bit more serious — or at least, the tone shifted.

“He’s going to get whacked,” Imus said about Carton, who is accused of ripping investors off to the tune of a few million bucks.

“He could get whacked,” co-host Sid Rosenberg replied from the phone.

Carton was arrested by the FBI Wednesday at his Manhattan home and charged with securities fraud and wire fraud.

The 48-year-old former New Jersey 101.5 FM “Jersey Guy”  and co-conspirator Michael Wright allegedly told investors that they had access to discounted blocks of tickets to sporting and music events, which they could turn around and sell for a profit. That access never actually existed and written agreements provided to investors were fraudulent, the FBI says. The millions raised were “misappropriated” and used in part to “pay personal debts and repay prior investors as part of a Ponzi-like scheme,” per the federal agency.

Some of that was purportedly used to cover Carton’s gambling losses.