“Crazy Rich Asians” director Jon M. Chu praised Adele Lim over her decision to leave the planned sequel for the hit Asian-American romantic comedy over a pay disparity between her and co-writer Peter Chiarelli.

“These things happen in negotiations, and I’m proud that she was able to stand up for her own measure of worth and walk away when she felt like she was being undervalued,” Chu wrote in a lengthy statement posted to Twitter.

Chu explained that when he learned that Lim was unhappy with her initial pay offer, he jumped in along with producers and Warner Bros. executives to try to reach an agreement.

“Unfortunately, by the time we came up with several different ways to satisfy everyone’s needs, a lot of time had passed and she declined the offer.”

Lim, a longtime TV writer who made her feature film writing debut with “Crazy Rich Asians,” will instead write the screenplay for the upcoming Disney animated film “Raya and the Last Dragon.” Her signing was first announced at the D23 Expo in August and, the film will be released in November 2020.

Chu says that he plans to work on future films with Lim, calling her his “sister and co-conspirator” during the development of “Crazy Rich Asians.” Chu noted that sitting in on the pay negotiations taught him more about how writers are paid based on experience in different fields of screenwriting.

Also Read: Julianna Margulies on CBS Not Paying Her What She Wanted to Appear on 'The Good Fight': 'I Wasn't Asking for a Million Dollars'

According to The Hollywood Reporter’s initial story on the talks, Peter Chiarelli was given an initial offer of at least $800,000 compared to Lim’s $110,000 based on industry standards determined by feature film writing experience. Chu noted in his piece that while Chiarelli only has official writing credit on two films prior to “Crazy Rich Asians,” he has rewritten and polished other scripts in an uncredited capacity.

“I agree with Adele that parity for women and people of color is crucial to the continued enlightenment of our industry and we still have a long way to go,” he wrote.

“What I discovered personally through this process is there are still things to debate amongst ourselves (like value of experience [vs.] lack of opportunity, tv [vs.] film writing, work experience [vs.] life experience, creative contribution valuations etc) which I am sure won’t be simple answers but I know we must try to figure it out to keep the needle moving.”

With Chu and the cast of “Crazy Rich Asians” committed to various other projects — Chu is set to direct a film adaptation of Lin-Manuel Miranda’s musical “In The Heights” for WB — a timetable for a sequel has not been established. The sequel is expected to be adapted from Kevin Kwan’s book “China Rich Girlfriend,” continuing the relationship between NYU professor Rachel Chu and her billionaire husband-to-be, Nick Young. 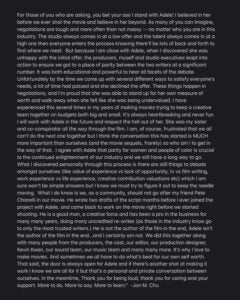