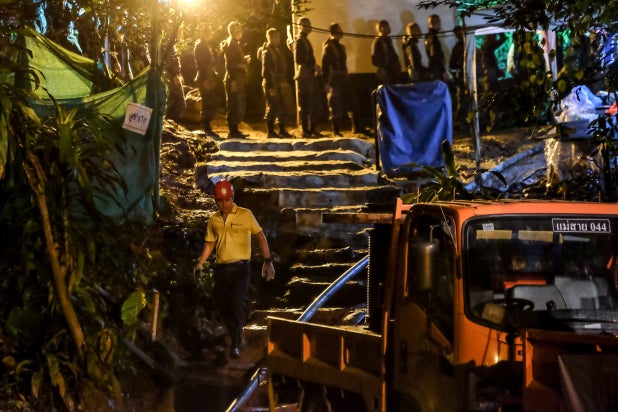 “I refuse to let Hollywood #whitewashout the Thai Cave rescue story! No way. Not on our watch. That won’t happen or we’ll give them hell,” Chu tweeted Wednesday.

“There’s a beautiful story abt human beings saving other human beings. So anyone thinking abt the story better approach it right & respectfully.”

I refuse to let Hollywood #whitewashout the Thai Cave rescue story! No way. Not on our watch. That won’t happen or we’ll give them hell. There’s a beautiful story abt human beings saving other human beings. So anyone thinking abt the story better approach it right & respectfully.

Ivanhoe Pictures, an SK Global company, is currently in talks with the most senior officials in Thailand both on provincial and national levels. They are also in talks with multiple studios who have shown interest about this project.

Also Read: Producers of Cave Rescue Movie Have Deep Thai Connections: 'We Didn't Just Fly on Over for a Story'

The studio and it’s sister company, SKE, develop international and local language pictures for global audiences with a concentration in the U.S., India, Taiwan, South Korea and Latin America. Their upcoming projects include the three-part series “Ghoul” premiering on Netflix on Aug. 24; the feature film “La Caja” developed in partnership with Mexico City-based Lucia Films; and the upcoming feature “Crazy Rich Asians” set for theatrical release in the U.S. via Warner Bros. on Aug. 15.

All 12 members of the Thai boys’ soccer team and their coach have been now rescued after being trapped in a cave for weeks. The news broke Tuesday morning when the final four children and their 25-year-old coach were saved by Thai Navy SEALs.

The rescue operation involved guiding the boys through a partially flooded cave system that took the life of one diver who attempted to reach the trapped soccer team. Some sections of the cave required climbing equipment, and one section that was flooded by stormwater was so narrow that the divers needed to remove their oxygen tanks in order to get through.

The trapped soccer team, which consisted of boys aged 11-16, was found last Monday by a team of divers after a nine-day search. It was originally believed that the team would have to stay in the caves until the end of monsoon season, which would last for several more months. But after the rains flooding the cave worsened, a team of 90 rescue divers — 40 Thai, 50 foreign — were sent in to extract them as soon as possible.

Chu is repped by UTA and Artists First.