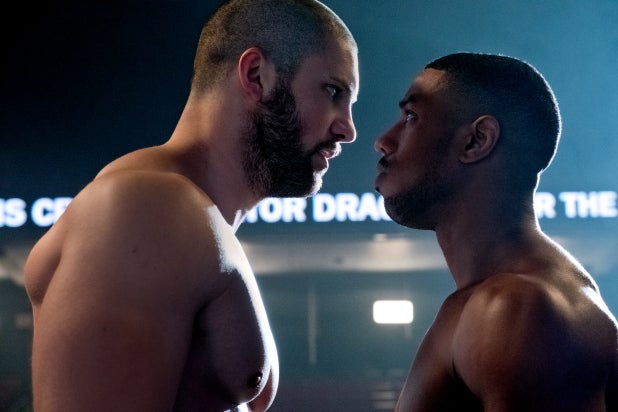 How in the world did we get two spinoffs out of “Rocky IV”? Granted, it’s not the most pressing question on your mind as you watch the agreeably paint-by-numbers “Creed II,” the inevitable sequel to Ryan Coogler’s 2015 hit. “Creed” reignited the “Rocky” franchise with the story of the late Apollo Creed’s outside-of-marriage son Adonis, played by Michael B. Jordan as a brooding young man contending with the legacy of a champion he never knew.

But it is a bit of a head-scratcher that the worst entry in Sylvester Stallone’s initial series — in which Rocky Balboa’s fight against Ivan Drago (Dolph Lundgren) was really jingoistic America versus a cartoon Soviet Union, which was really aging action star versus bulked-up newcomer, but which was REALLY Stallone’s terrible direction pummeling the crap out of Eisenstein’s theory of montage — also sowed the seeds for its newfound appreciation and reworked survival. Apollo’s death in the ring against Drago happened, after all, in “Rocky IV,” and now the Drago matchup returns to animate the son’s story in “Creed II,” where filmmaker Steven Caple, Jr. takes over the reins from the now hotter-than-hot Coogler.

Dads and sons (and one daughter) are all over the place in “Creed II,” enough to make one wonder why its release wasn’t tied to Father’s Day. Screenwriters Juel Taylor and Rocky-universe originator Stallone, working from a story by Sascha Penn and Cheo Hodari Coker, dip into no fewer than five instances of emotionally fraught cross-generational relationships, including Ivan Drago (a returning Lundgren) shaping his bruiser of a boy Viktor (slab-like Romanian pugilist Florian “Big Nasty” Munteanu) to be Adonis’s new competitor for the heavyweight title, Rocky (Stallone) dealing with his own self-imposed distance from grown son Robert (Milo Ventimiglia), and a reminder that even Wood Harris’s character has the trainer DNA of Tony Burton’s coach role from all the “Rocky” movies.

Watch Video: New 'Creed II' Trailer: Michael B Jordan Takes on the Fight of His Life

Picking up three years after the previous film, “Creed II” starts in the Ukraine, where Viktor Drago, under the watchful eye of his daddy, is crushing an opponent in a dankly lit arena, a muted-palette callback in Kramer Morgenthau’s cinematography to the hidden-away Mexican bouts that introduced us to Adonis’s undiscovered boxing prowess in “Creed.” In America, meanwhile, Adonis’s sterling career under Philly’s favorite son has finally earned him a heavyweight title bout, even if it hasn’t fully prepared him to handle the nerves of proposing to singer girlfriend Bianca (Tessa Thompson).

While “Creed” struggled to fit Bianca’s outspokenness and independence into its masculine-centered narrative, the budding-family moments between Jordan and a more fully-involved Thompson have the lived-in, real-couple appeal that animated the Rocky-Adrian relationship in the franchise’s early days. Sometimes the familiarity that comes with a sequel — especially with good actors — can be a blessing in short-handing a dramatic tone.

What the story beats of these movies are built around, though, are the fights. When a savvy promoter (Russell Hornsby, “The Hate U Give”) publicly airs the notion of Apollo Creed’s son truly proving his worth by fighting the spawn of the brute who dealt his father a death blow, everyone’s triggered. Adonis’s sense of righting a tragedy is inflamed, while Bianca and his mother Mary Anne (Phylicia Rashad) know they can’t convince him not to fight him but show plenty of worry in their tone. Only Rocky, still scarred by the fact that he couldn’t save his friend’s life 30 years ago, pushes back, refusing to coach him. Adonis preps without him, and in the way of all “Rocky” movies, a clock-cleaning gives way to healing, reflection, reunion, music-scored training (this time in the desert) and an avenging comeback.

The Drago storyline, meanwhile, renews Lundgren’s granite menace and accented threats {“Moy son will br-r-reak yorr boy”), but with the added psychology of Ivan as a disgraced, forgotten national hero abandoned by Viktor’s mother, which also means the return of Brigitte Nielsen. That Lundgren finally gets to give a real performance is, one supposes, an improvement — Caple’s direction of this material is in line with Coogler’s low-key, indie vibe — but we’re still talking a movie series almost proud of its emotional predictability.

And yet Jordan remains a model of dimensional ferocity, laced with the right vulnerability. And Stallone is Stallone is Stallone; is he really going to change up the mumbly, heartfelt galoot act eight films in? Or the platitude-go-round he calls writing? The variations on the same what-are-you-fighting-for dialogues throughout “Creed II” are almost impressive in their shameless repetitiveness.

Which leaves the canvas battles, and they faithfully meet today’s standards for performance realism, camera kinetics, editing rhythm, and body-blow sound design while thankfully avoiding the oily sheen Stallone favored in the ’80s. The truth is that “Rocky IV” and “Creed II” sharing the same cinematic universe requires supreme suspension of disbelief. But taken as descendants of the original, “Rocky IV” is the delinquent you never talk about, while “Creed II” at least knows how to keep the family business humming.