“The Masked Singer’s” Ken Jeong is the guest judge on this week’s “Crime Scene Kitchen,” and judging by TheWrap’s new exclusive clip from the Wednesday episode, he’ll be stealing some attention from his former “Community” co-star Joel McHale.

Erinn, in particular, seems especially distracted by “Masked Singer” judge Jeong’s presence, much to the dismay of McHale and her teammate Amanda. “If anything goes wrong, I’m blaming her,” Amanda warns as Erinn and Jeong hug it out.

Hey, after Joel’s many visits over to Ken’s “Masked Singer” home over the past few years, it’s only fair that Ken gets a chance to step over onto Joel’s sweet new gig on an equally mysterious (but so much more delicious) Fox competition, right? Right!

Of course, we don’t know if Joel was anticipating just how much of his thunder Ken would be stealing when he stopped by. “You can’t just try and win over the contestants to you,” Joel says as Ken bonds with Erinn. “Yes he can,” Erinn says, laughing.

The clip also reveals that two of the teams are making variations on a French opera cake for one of this week’s challenges — though it wouldn’t be “Crime Scene Kitchen” if anyone knew for sure, now would it? 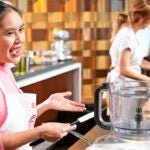 See TheWrap’s exclusive clip from Wednesday’s episode via the video above.