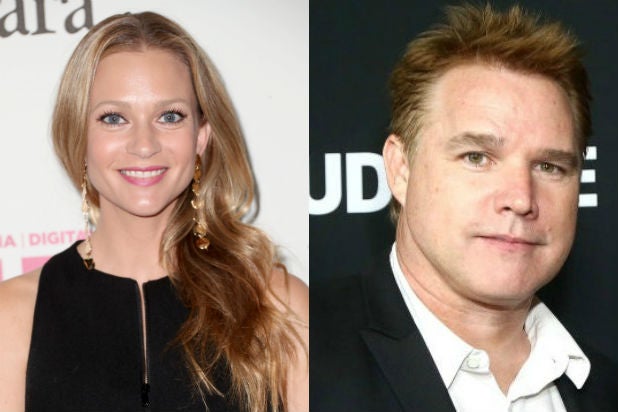 “Criminal Minds” star A.J. Cook is suing her former manager, David Guillod, for not disclosing that he faced multiple sexual assault accusations — and says he should repay money he earned from her and other actresses, including Gina Rodriguez, Kristin Chenoweth and Paula Patton.

The lawsuit, which was filed late Monday and seeks $1.6 million for Cook, argues that Guillod’s concealment of his “sexual predator” past could have harmed her image and reputation as a strong advocate for women. The lawsuit lists several previously unreported allegations against Guillod, and accuses him of scheming with Cook’s previous lawyer to overcharge her for his services.

Stories of morality clauses for actors are nearly as old as Hollywood. But Cook’s lawsuit is a rare attempt to hold a manager responsible for personal accusations that might reflect poorly on his famous clients.

In a statement, a representative for Guillod accused Cook of trying to “piggyback” on the #MeToo movement to get out of paying her debts. Guillod has denied any wrongdoing since TheWrap first reported on four sexual assault accusations against him in November 2017.

“This frivolous lawsuit is a reaction to two lawsuits filed against A.J. Cook and her attempt to distract from her own financial liability,” the statement said. “Mr. Guillod has represented Cook for over 20 years and together made her a household name. She has now elected in her own greed and self servicing manner to piggyback on a very important movement in an effort to circumvent her paying commissions owed. As Ms. Cook has no claims against Mr. Guillod she has elected to revisit unfounded claims made again [sic] him. No criminal or civil charges have ever been brought against Guillod.”

Cook’s attorney, Michael J. Saltz, said: “Mr. Guillod’s victims will soon be testifying in this matter. As it is our intent to prove that the claims against Mr. Guillod are both disturbing and true, and that Mr. Guillod’s failure to disclose this information to Ms. Cook is both illegal and inexcusable.”

Cook’s case is a countersuit in response to Guillod’s former company, Primary Wave Entertainment, suing her in October 2018 for at least $333,000 in unpaid commissions. She said she stopped paying the company when she fired Primary Wave because of the accusations against Guillod.

Cook was one of several women — including Rodriguez, Chenoweth and Patton — who exited Primary Wave after the TheWrap reported multiple accusations of misconduct against him in November 2017.

Though Rodriguez, Chenoweth and Patton could all be called as witnesses in the case, none are parties to the lawsuit, and it does not specify what damages they could receive.

TheWrap first reported on Nov. 2, 2017, that “Ted” actress Jessica Barth accused Guillod of sexually assaulting her in 2012. Two days later — on Nov. 4 — Cook texted Guillod, according to a screenshot his rep provided to TheWrap.

“Thinking of you,” said the text. “Hang in there.”

Later that day, Guillod resigned as co-CEO of Primary Wave.

A few days later, Cook was still thinking of Guillod — but now she was thinking of firing him. She left Primary Wave on Nov. 9, 2017. Rodriguez had exited by then, too.

On Nov. 10, 2017, TheWrap published another story detailing more accusations — that Guillod raped a former assistant on a company retreat in 2014 and sexually assaulted two other women at his home in Los Feliz in 2015. Only Barth’s name has been publicly released.

Over the next few days, news broke that Chenoweth and Patton were also exiting Primary Wave.

NEW ACCUSATIONS: A 15-YEAR-OLD, A HOLE IN THE SCRIPT

Besides recounting the four previous accusations, Cook’s lawsuit includes several new ones. No names or dates are provided, but the lawsuit alleges that:

• One unnamed “very famous child actor” fired Guillod for making sexual comments to her when she was 15 and he worked at Handprint Entertainment. (He exited the company in 2002.)

• Guillod once exposed himself to an unnamed female client by poking his penis through a hole in a script when he worked at United Talent Agency. (He left UTA in 2009.)

• Guillod sexually harassed women at Handprint, UTA, Paradigm Talent Agency (which he left in 2011) and his own company, Intellectual Artists Management.

Intellectual became part of Primary Wave Entertainment in a 2015 merger. Cook’s lawsuit names PWE as well as Guillod as defendants.

“PWE has been in litigation with Ms. Cook for unpaid commissions since October 2018, and therefore cannot comment directly on her just filed countersuit,” the company said in a statement. “That said, PWE remains committed to our core values of respect and inclusion, with a zero-tolerance policy toward harassment or abuse of any kind, including the work we do with our clients. In November 2017, within 48 hours of learning the extent of the allegations against our former colleague Mr. Guillod, we parted ways with him, and other than matters of separation, have no business with him. We stand by the ethical business practices that have served us well for 13 years.”

Cook’s attorney said that Guillod’s failure to disclose the accusations to Cook could have damaged her reputation and career.

“She prides herself on, and has run her career in a manner consistent with, supporting female empowerment issues and women’s rights,” said Saltz, of the firm Jacobson, Russell, Saltz, Nassim and De La Torre. “She is at risk of losing credibility in her brand if people presume that she knowingly made a person accused of multiple rapes and/or sexual assaults the representative of her and her brand.”

In its October 2018 lawsuit, Primary Wave accused Cook of breach of contract. The other litigation referenced in the Guillod statement on Tuesday was between Cook and attorney Neil Meyer, who sued her in August 2018.

“Mr. Guillod forced A.J. Cook to bring all of her claims against him by orchestrating the filing of two frivolous lawsuits based upon oral contracts that are unenforceable as a matter of law,” Saltz said. “As such, Mr. Guillod should not be surprised that Ms. Cook is defending herself in Court and pursuing her affirmative claims after Mr. Guillod’s attempt to illegally pressure Ms. Cook into paying moneys she does not owe backfired.”

Cook said she hired Meyer as her attorney in 2013, at Guillod’s recommendation. Meyer represented her in negotiations with ABC Studios, which produces “Criminal Minds.”

Cook contends that Meyer and his firm, Meyer & Downs, raised its fee from 2.5 percent per episode of “Criminal Minds” to 5 percent without her agreement, and that Guillod, as her manager, arranged for the increased payments to be made to Meyer & Downs without her consent.

Cook said that when she decided to leave Primary Wave because of the accusations against Guillod, Meyer urged her not to go.

“A.J. was appalled that Meyer… could even suggest that A.J. continue to employ someone accused of raping multiple women and committing sexual assaults and to otherwise have her name and brand sullied by such an affiliation with Guillod and the company that knowingly employed such a person,” the suit said, referring to Primary Wave.

She said that after she left Guillod, she learned of what she called excess payments that he had authorized to Meyer. She then stopped paying both Meyer and Primary Wave. She contends that Guillod and Primary Wave then met with Meyer to provide confidential information about Cook and encourage Meyer to file a “frivolous lawsuit” against her.

Cook said Primary Wave also publicly disclosed confidential terms of her contracts with ABC Studios to harass and embarrass her.

Cook’s lawsuit argues that Guillod and Primary Wave “have collected commissions from their female clients under false pretenses and in violation of their fiduciary duties… and should therefore be forced to disgorge all of their ill-gotten gains and make restitution back to their female clients.”

The Santa Barbara County Sheriff’s Office is investigating the 2014 accusation from the retreat, a spokeswoman for the office said Tuesday. The investigation has been open for more than a year.

Accusations against Guillod are also under review by the Los Angeles District Attorney’s Office, but representatives for the office have declined to say what accusations are being investigated.