Kevin Costner‘s newest bid for Liam Neeson-style late-career action significance proves to be one of his most solid. He’s the central figure in “Criminal,” a mind-meld espionage yarn featuring the 61-year-old as Jerico, a violent psychopath implanted with a dead CIA spy’s valuable memories. Though the movie around him swerves from outright silly to mindfully pulse-pounding — often recalling the more cleanly ludicrous action era dominated by producer Jerry Bruckheimer — it’s the old school hardass pleasures Costner provides that give this thriller from director Ariel Vromen (“The Iceman”) its bruising bona fides.

It takes a lot of initial expository huffing and puffing to get to the gimmicky concept in Douglas Cook’s and David Weisberg’s screenplay: The breathless opener shows CIA operative Bill Pope (Ryan Reynolds) chased through the streets of London while on a mission to find a dangerous hacker called The Dutchman (Michael Pitt). There’s even time for a quick phone call to Pope’s beautiful wife (Gal Gadot), to inform moviegoers that even in peril, he’s an attentive husband and father.

Also Read: Kevin Costner Defends 'Waterworld' and Swears It Is 'Beloved' Around the World

But even though the spy’s movements are monitored in real time by his London bureau boss (Gary Oldman) from the usual intelligence-headquarters bank of monitors, Pope is nonetheless trapped, tortured and left for dead by agents working for a villain the on-screen text describes as a “Spanish anarchist” (Jordi Molla), one of the more laugh-out-loud character-establishing details in recent memory.

Worried about losing data that could prevent a madman from getting hold of the command codes for America’s weapons arsenal, Oldman’s spook chief has Pope’s body squirrelled away to a top-secret base for an experimental procedure: transferring the spy’s DNA-specific neural patterns to a live brain. But according to the soft-spoken neurosurgeon (Tommy Lee Jones) who devised this breakthrough — and who insists it’s five years from the human-trial stage (uh oh) – the only suitable transplant candidate with the required undeveloped frontal lobe is a death row prisoner (double uh oh).

Enter shaggy-haired Costner, growling, chained by the neck, taunting terrified guards about his tolerance for tranquilizer darts, and clearly eager to make good on the explanatory dialogue that says Jerico shows “total lack of empathy” and “doesn’t understand society or how people are supposed to behave.” Understood. Just get to the part where Jerico escapes and has both the CIA and the bad guys looking for him across London. 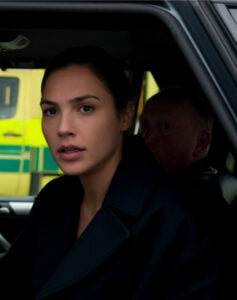 The Hollywood metaphors are in place: shunting aside a younger action star so an older one can take over, freeing an aging A-lister from movie jail. But Costner, like a veteran racer behind the wheel of a favorite car, approaches the role with a canny gusto, and director Vromen — familiar with putting a bad dude front and center after directing Michael Shannon in “The Iceman” — knows he’s got an asset he can ride through the usual cat-and-mouse clichés all the way to the end.

Where, in the past, Costner’s overplayed reticence in laconic hero roles often grated, it works here in reverse: in the service of a goateed, murderous convict with a bloody drill-hole above his left ear, and a good guy’s memories giving him headaches and altering his behavior, the actor’s penchant for underplaying makes for an agreeably tetchy unpredictability. His rhetorical “What was that?” asides whenever Jerico does something irrational for him – speak a foreign language, randomly show kindness after a violent outburst – are usually pretty funny. When was the last time Costner was a movie’s energy source, “Silverado”?

The pair of heavyweight names around him don’t fare as well, although it’s fun to imagine that they’re jealous about Costner snagging the juicy role. An especially weathered Jones looks particularly glum as the sympathetic medical voice in Jerico’s ear, providing him pain pills and trying to tease out the vital info from Jerico’s interruptive visions, while Oldman is in standard-issue barking-tyrant mode from start to finish. Elsewhere, Pitt’s role is pretty thankless, with little of the actor’s edginess allowed to shade what is essentially a nervous Euro-nerd in over his head, and Alice Eve‘s CIA analyst barely registers. The less said about Molla’s Bond-villain overacting, meanwhile, the better.

Surprisingly, given their inherent ridiculousness, it’s the scenes between Costner and Gadot that work best, thanks to their emotional commitment to a story thread in which Jerico’s added memories induce a protectiveness toward Pope’s family, and the widow’s growing recognition that her dead husband is somewhere inside this hunted killer. Vromen gives them plenty of room to sell this unlikely bond, and they do, which gives the perfunctory chaos of the final showdowns an undercurrent of genuine urgency.

Apart from Costner, “Criminal” is a suitable-enough “Bourne” knock-off, well-paced in its race-against-time scenario if not always airtight about its logical leaps. There isn’t a whole lot of moral handwringing either about its medically intrusive, intelligence-abusive conceit, which makes it patently unlike the politically-minded “Bourne” movies. Jerico, spurred by peaceful Pope-embedded visions, at a certain point just wants to get to the shore. And that’s “Criminal” in a nutshell: the movie equivalent of a diverting beach read.