A moldering manor house, a young virgin with a predilection for ornate nightgowns and dark passages, and an aristocratic family hiding some truly terrible secrets are just some of the ingredients of Guillermo del Toro‘s “Crimson Peak.”

The insanely lush Gothic romance and ghost story plays like a hitherto unrecorded collaboration between Edgar Allan Poe, Edith Wharton, the designers of Disneyland’s Haunted Mansion and whoever directed all those Bonnie Tyler music videos in the 1980s.

And while the film boasts a talented ensemble, let’s give credit to the film’s real star: costume designer Kate Hawley (“Edge of Tomorrow”), who drapes the innocent Edith (Mia Wasikowska) and the duplicitous Lucille (Jessica Chastain) in dresses and nightgowns that perfectly match del Toro’s directorial style here: insanely overdone yet perfectly appropriate.

Del Toro, who also co-wrote with frequent collaborator Matthew Robbins, pays homage to the British horror movies made by Hammer Films in the 1950s and ’60s, and “Crimson Peak” offer fitting tribute, down to the long sequences where people wander up and down creepy hallways in between scare moments.

Defenders of the recent “Godzilla” reboot justified that film’s delayed gratification as an homage-based decision, but del Toro and Robbins at least give audiences something to look at and think about while we’re waiting for the next money shot.

Wasikowska’s Edith Cushing — named for Hammer star and eventual “Star Wars” supporting cast member Peter Cushing — is an odd duck amid high-society girls in 1901 Buffalo, N.Y.; she’s a writer, even though her haunted tales are rejected by publishers who think women should write only romances. Edith has cause to be interested in the supernatural, however, since she was visited as a child by the ghost of her late mother, who warned her to beware of something called Crimson Peak. 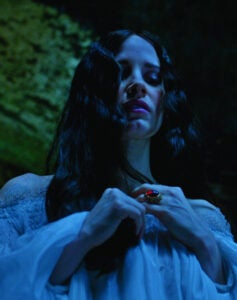 While her father Carter (Jim Beaver) would like to see Edith pair off with her childhood friend, optometrist Alan McMichael (Charlie Hunnam), her head is turned by visiting British baronet Thomas Sharpe (Tom Hiddleston), who sweeps the sheltered young girl off her feet under the watchful eye of his sister Lucille. Carter doesn’t get the chance to share with Edith what he has learned about the Sharpes before she is whisked off to their estate in England, built atop a mine producing clay so red that the floors bleed crimson.

Production designer Tom Sanders and his team have created the mother of all haunted houses, complete with a dramatic staircase, rickety elevator, rusty pipes, a hole in the ceiling through which leaves (and later, snow) fall to the floor of the foyer, and both an attic and a basement Edith is warned to avoid. (Lucille skulks around like Mrs. Danvers in “Rebecca,” wielding a massive set of keys to all the rooms.)

The more Edith learns about who she married, and why she’s really there, and what spirits still possess this terrifying home, the more she wants to escape. But when winter comes, bringing snow that absorbs the color of the clay beneath, she discovers that Crimson Peak more than merits her late mother’s dire warnings.

Also Read: Charlie Hunnam Still Regrets Pulling Out of 'Fifty Shades of Grey': I Was 'Having Panic Attacks'

The sight of Wasikowska — looking like a Botticelli goddess in a puffy-sleeved brocaded nightgown, hair streaming down on both sides, clutching a candelabra — clearly pushes del Toro’s Gothic-horror buttons, and he shares that delight with audiences; when she eventually throws open the doors to the house only to face a great whoomp of snow and wind, it’s hard not to shriek with delight, and it’s at that operatically unrestrained level that “Crimson Peak” works best.

These actors have been called upon to play archetypes, and they do so brilliantly. The Buffalo sequence plays like “The Age of Innocence,” with Alan and Thomas battling for Edith’s attention at dances and dinners. Once in England, Thomas and Lucille share any number of foreboding stares while Edith pieces together their true intentions. (Beaver, the principal cast’s one American actor playing an American character, imbues the father with enough genuine spirit and paternal affection to keep him from being merely a plot device.)

Fans expecting wall-to-wall gut-bucket phantasmagoria may be surprised to see how much time del Toro gives to the love triangle and to the slow accumulation of the film’s creepy atmosphere. While the digital effects are undeniably contemporary, “Crimson Peak” is otherwise a period homage that mostly plays like a period film, rarely giving in to contemporary notions of pacing and payoff.

When the scares do arrive, however, they’re effectively unsettling. Only once or twice does the film indulge in cheesy jump effects, where the audience flinches because of a sudden LOUD noise. Instead, you can feel the director savoring the anticipation and then resolving it skillfully and grandly. The result is del Toro’s best film since “Pan’s Labyrinth,” one that should rightly become a staple for many Halloweens to come.