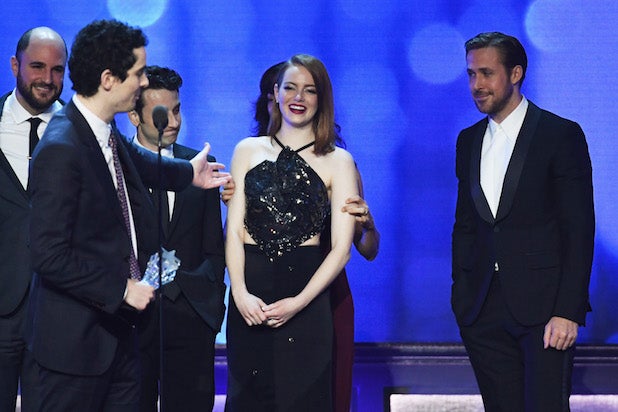 “La La Land” sang and danced is way to the top honor at the Critics’ Choice Awards on Sunday — taking Best Picture of the year against stiff competition like “Moonlight,” “Manchester by the Sea” and “Arrival.”

While the Hollywood guilds have yet to chime in, writer-director Damien Chazelle’s dazzling but bittersweet musical remained the clear favorite in the Academy Awards race, with 13 of the last 17 Critics’ Choice Awards winners going on to win the Oscar for Best Picture.

Chazelle also accepted the Best Director prize, and his film emerged as the most winning of the evening — claiming eight out of its 11 nominated categories.

One of the few categories that the Oscar frontrunner did not win was Best Actress, where Natalie Portman’s haunting turn as America’s most iconic First Lady in “Jackie” topped Emma Stone’s singing and dancing performance in “La La Land.” Casey Affleck won for Best Actor in “Manchester by the Sea.”

Mahershala Ali and Viola Davis won the supporting actor and actress awards for “Moonlight” and “Fences,” respectively. Eric Heisserer won the adapted screenplay award for “Arrival” and Chazelle and Kenneth Lonergan tied in the original-screenplay category for “La La” and “Manchester.”

Best Actress in a Comedy Series went to Kate McKinnon, a must-see on “Saturday Night Live” this year thanks to her portrayal of presidential hopeful Hillary Clinton.

The Critics’ Choice Awards are voted by members of the Broadcast Film Critics Association and the Broadcast Television Journalists Associations, two partner organizations made up of critics and writers for television, radio and internet outlets. About 300 members are in the BFCA, with fewer in the BTJA. (TheWrap has members in both groups.)

And this year, the timetable was moved up to make Critics’ Choice the first major mainstream show to announce nominations and give out awards. That move that meant its members couldn’t see films like Martin Scorsese’s “Silence” and the new “Rogue One: A Star Wars Story” before voting.

Earlier this year, a Critics’ Choice deal that made Entertainment Weekly an exclusive promotional partner drew criticism from members who represented other outlets, and led to a small number of resignations.

Over the years, 13 of the 21 Critics’ Choice Awards Best Picture winners have gone on to win the Oscar. (There were no duplicate winners in the first four years, so it’s also 13 out of the last 17.) Last year, of the 19 categories that overlap between Critics’ Choice and the Oscars, the same film won in 15, including Best Picture winner “Spotlight” and three of the four acting winners.

Read the full list of honorees. Winners indicated by *WINNER:

Also Read: Behind the Scenes of That 'Nocturnal Animals' Opening Scene: 'A Half-Ton of Naked Women'